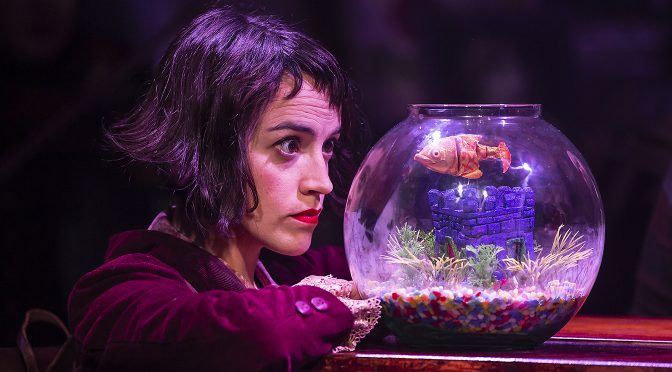 Like a recent almost-best-film-Oscar-winner, this adaptation of the 1951 MGM classic movie musical gains a lot of momentum from nostalgia. It’s a trip to Ooh-La-La Land – a struggling post-war France full of artists and amour. With a classic score and gorgeous dancing, aided by updated touches from Craig Lucas, the yearning for style and sincerity so often connected with the past is delivered to perfection.

The romance here has plenty of swoon, but is satisfyingly grown up – with three men falling for one girl, they can’t all get her. Set in the “ashes of war”, conflict hangs over the show. It’s Christopher Wheeldon’s achievement as director to combine this trauma with the theme of celebration: optimism is the role of the Arts post-war. This is arguable, of course, but it makes this show joyous.

Since the music and lyrics are by George and Ira Gershwin it’s a given that the tunes are sublime, but the orchestration from Rob Fisher is particularly sensitive and the voices well suited. David Seadon-Young plays talented young composer Adam, working with wannabe cabaret performer Henri (Haydn Oakley); both sound great and act well. With the same qualifications, Zoë Rainey plays Milo Davenport, the American patron of the ballet that forms the show’s divine finale. Described as a “pistol” of a woman, Rainey hits the bulls-eye with her performance.

Ballet star Robert Fairchild originated the role of Jerry on stage. An aspiring demobbed artist, Fairchild has a gracefulness that most could only dream of. Everyman’s muse Lise is played by Leanne Cope, whose gorgeous gamine looks make this perfect casting. Both dancers, who travelled with the show from Broadway, can sing well and their chemistry is breathtaking. Their romance isn’t a matter of youthful optimism on Jerry’s part, but rather the drive to make the most of the rest of his life, while Lise’s desire to live with “no history, no past” shows there is plenty she needs to escape. It makes the stakes high and their dancing together truly ecstatic.

It’s the footwork that is the star of the show. Wheeldon has played to his strengths as a choreographer by emphasising the dance, and it is among the best you could see. Even moving the scenery around is done stylishly, with everyone dressed in costumes by Bob Crowley that are good enough make you sigh. There’s a sense you wouldn’t want to work for those in charge here – the rigour on display is so daunting – but watching the result is amazing. It’s an ensemble of impeccable talent working flat out for an audience’s entertainment and achieving tens across the board.