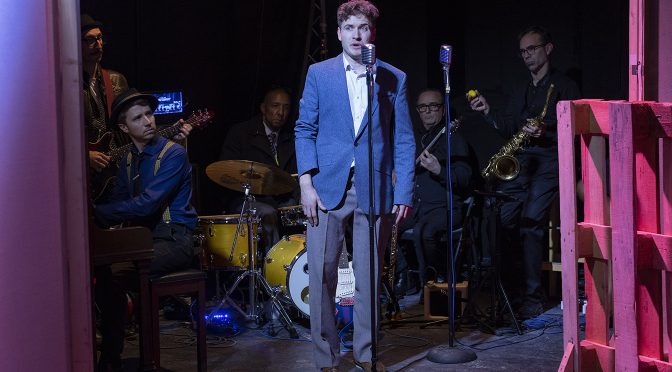 It’s nicer to emphasis the good things from any trip to the theatre. After all, nobody sets out to put on a bad show. There is talent on and off stage at this friendly venue in Hoxton, but Punchy! is a show with serious problems.

The wafer-thin coming-of-age story follows the titular character (capably performed by Robert Hook) from an anti-climactic brush with the law to an unconvincing romance. Jack Terroni’s story, with a book by Kevin McMahon, drags despite being only 90 minutes long.

Punchy! is not the musical promised – rather, it’s a play with songs, and these are frequently interrupted and hard to hear. The songs, by Terroni, aren’t bad, but the sound quality is poor. And there’s a baffling amount of recorded music used considering a band is on hand.

Director Tiffany King does her best to inject life into the show and she has earned her money, dealing well with rapid changes in the emotional tone of the script. The choreography has its moments (possibly better suited to a screen than the stage), and the costumes are impressive.

The big issue comes with the characters. Various salt-of-the-earth types try to help our hero. And there are his Soul and his Ego, amiably depicted by Jaymes Sygrove and Peter Parker Mensah, following him around. If the trio sounds like an interesting idea… well, in practice, it isn’t.

It’s good that Soul and Ego are a ‘team’ and not simply at odds. And the chemistry between Sygrove and Mensah, like that between Hook and his love interest, played by Lucy Penrose, is good. But the babble spouted – including chats with the dead and a veritable choir of guardian angels – is awful. “It’s a struggle,” says Soul at one point. Yes, yes it is.

The attempts at humour are terrible and the dialogue leaden, painfully blunt and insultingly didactic. There’s only one thing worse than a character asking, “What’s the point of it all?” And that’s another character answering them. Nearly every line sounds like something from a self-help book. Hold on…

Here’s the plot spoiler. Punchy’s journey is based on Richard Barrett’s book, What My Soul Told Me, and his seven ‘levels of consciousness’. The latter are helpfully reproduced in the programme. Whether The Barrett Academy is useful, I can’t say – but applying such ideas to a drama hasn’t helped here. Base characters on a diagram and they end up sketchy. It’s little comfort to those involved but, in this confused show, at least it’s clear what has gone wrong. 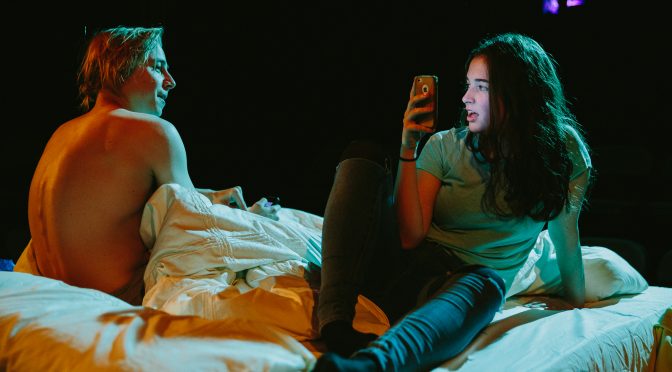 A schoolteacher and a pupil in a hotel room for a dirty weekend: that is the simple scenario for Fiona Evans’ play. As well as getting extra marks for addressing a depressingly topical subject, Evans’ writing can be praised for an intelligent handling of the subject. And it has a nice twist – after we see a female teacher with a schoolboy, the roles are reversed and we see a young girl as the victim.

Despite the play’s brevity, the characters are complex and we don’t automatically see these children as victims – occasionally they seem more mature than the adults taking advantage of them. There could be more tension; that the teachers are putting their “life on the line” isn’t the focus – sex is, and the intimacy is creepily convincing. With the script repeated almost exactly, it’s a great game of spot the difference: which brings one hesitation – steering so clear of sensationalism is an achievement, but you don’t feel as uncomfortable with this topic as is really appropriate.

While the premise might seem just too neat a trick, there’s no doubt Scarborough is an effective showcase for the talents of young company Fictive Theatre. Taking to the stage are Charlie Tantam and Ava Pickett, superb as they change characters after the interval. They make the repetition riveting. And I have to praise their professionalism at working through a klaxon-like ringtone during the show – they didn’t skip a beat while I thought we were under attack. Pickett’s transformation is the most noticeable: from harassed PE teacher into precocious schoolgirl, and she adds an unsettling injection of humour. Director Simon Paris deals with staging the show in the round impeccably and there are some brave pauses that show a real confidence in the material. It’s great to have a new team to watch out for.