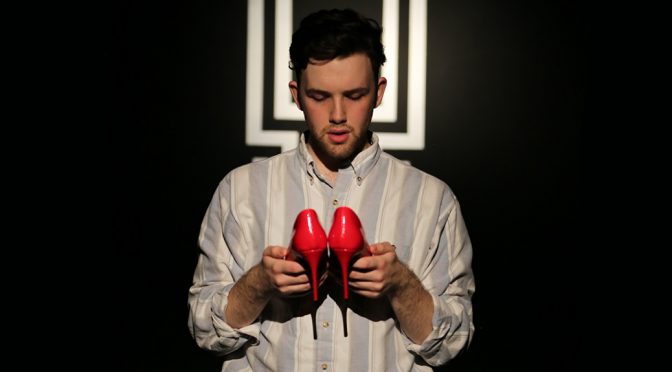 Cormac Elliott does a fine job as the lead in John King’s new play. Elliott manages to hold the stage as an unappealing character called Seán, who searches for an unsuitable man to take to his sister’s wedding when his boyfriend, who he’s dumped anyway, isn’t invited. It’s a matter of taste about how sour you find this premise, but as a storyline it proves unfortunately unfruitful.

Airlock Theatre, under the direction of Robbie Taylor Hunt, tries hard to make the idea interesting. The ensemble use microphones to great effect and add a lot of physicality. All the cast take on multiple roles, which proves effective for scenes when Seán is on a dating app, or they join to perform as one, making the character of his nan a real highlight. Katherine Laheen and Clare McGrath both do well, Ashling O’Shea is poorly served as Seán’s best friend (a role surely ripe for satire), while Charlie Ferguson steals several scenes. It’s easy to enjoy the performances.

However, the best efforts of cast and crew struggle with King’s play. The jokes are old, tame and based on stereotypes. That titular Greek goddess of discord arrives too late and feels tacked on. By way of explaining the project, we’re told that “tolerance is not enough”: that the family should embrace Seán’s sexuality and whatever partner he chooses. A fair point, but the perils of self-righteousness that King documents deflate this aim. It’s difficult to bother about Seán, and I’m not prejudiced just because he uses his phone in the theatre…well, maybe a bit. His journey to embrace his feminine side, something that he’s been ashamed of, is interesting. But by the end, with his upstaging of the bride on her big day, Seán’s self-indulgence overpowers the play. This character is lucky to have got an invite anywhere, let alone a plus one.