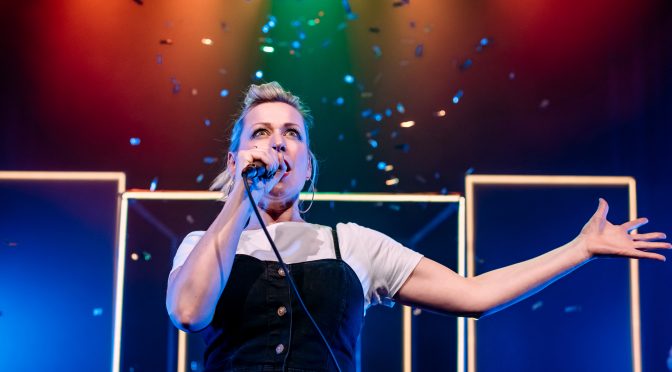 Many dream of being a rock star at some point in their youth but for Cora Bissett, when just out of school in Fife, it actually happened. Her band, Darlingheart, had a contract and backed big Britpop names…for a short time at least. This play looks back at that success, and its consequences, using Bissett’s diaries. With the help of musicians Emma Smith, Simon Donaldson and Harry Ward, who brilliantly take on cameo roles as well as accompanying her, Bissett sings and narrates her biography like a true star.

It turns out that the big break came at a high cost. And since this is real life on stage, the price is prosaic and predictable; the band work hard and are ripped off. They split up and attempts at a new direction for Bissett fail; she ends up broke and busking, feeling a failure twice over. This is not a new tale for creative folk. And Bissett’s own editing, alighting on moments of personal significance, leads to a disjointed feel to the action that could be fine tuned. Thankfully, Bissett’s telling saves the show. With some neat theatrical touches from director Orlan O’Loughlin, and strong sound design from Michael John McCarthy, the winning tone throughout is of warmth and honesty; mistakes so freely admitted are easy to forgive.

While Bissett’s aim to is explain what made her the woman she is today – her family as much as her career, a task achieved with moving integrity – we could do with seeing more of her in the present. The more recent story of her finding love and being a mother as well as taking control of her creativity could be elaborated on. For the truth is that Bissett gets more interesting as she grows up. Less of the nostalgia and more of what she she wants for her and her child’s future would be welcome. The success of the show at the Edinburgh Festival and a world tour show that Bissett has enormous appeal as a performer. As the rousing final number proves, forget young dreams;  it’s right now that Bissett is really cool.