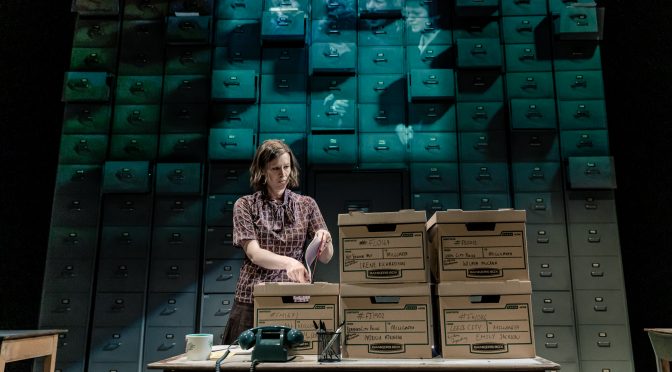 If you are a lover of true crime stories, you’ll lap up this show. An in-depth retelling of the Yorkshire Ripper case that gripped Britain in the late 1970s, the detail is fascinating and the story compelling. But there’s more to Olivia Hirst and David Byrne’s play – an intelligent engagement with history makes their work the very best of its kind by questioning the genre it is part of.

Hirst and Byrne condense events with skill, but their real triumph is in imposing focus on the story by highlighting police work and effectively ignoring the killer. The raw material is fascinating: the lengths the police went to over tyres, bank notes and the sheer number of people interviewed.

Yet what provides the driving force for the show is the tension of working a case that is massive and inventive – apparently changing police procedure – but was ultimately a famous failure. Aided by excellent live video work, designed by Zakk Hein, and a Kafkaesque set from Patrick Connellan, Byrne, along with Beth Flintoff, directs with discipline. The action – in reality slow, boring, work – becomes engrossing and the impact of events powerful.

The precision creates characters a long way from your average crime drama, surely aided by the fact that the show is devised by its ensemble. A cracking cast rises to the material with solid performances. As police under pressure Colin R Campbell, Peter Clements, Ben Eagle and Jamie Samuel are all good, creating an impression of a tight team with conflicts big and small managing to inject a surprising amount of humour. But Hirst and Byrne are relentless and focus further.

For The Incident Room has a steely eye on both sexism and the responsibilities of telling stories of this kind. Parallel instances of women in a men’s world reflect both of these concerns. A female journalist, played with winning presence by Natasha Magigi, who sees the chance for a big break, provides commentary while piling on the dramatic pressure. Meanwhile, detective Megan Winterburn, ignored for promotion and doing far too much typing, narrates events in a very special fashion. As Winterburn re-enacts the case in her mind (as if she were rewriting the story, like the playwrights) we see how what she could have done haunts her. Hindsight reveals how traumatic the case was for the police involved. It makes a star role for Charlotte Melia, who gives a magnificent performance.

The Incident Room knows that its subject matter treads a fine line between truth and “titillation” and is careful to address the victims of the Ripper’s crimes. Here the skill is to continue to reflect those concerns about story telling in such a sensitive, honest, fashion. With a woman who survived an attack, Maureen Long, the wish is to be forgotten. Fearing she will be forever defined by her victimhood, an address to the audience, delivered with passion by Katy Brittain, who takes the part, serves as a powerful theatrical moment characteristic of a show marked by both brains and sensitivity.