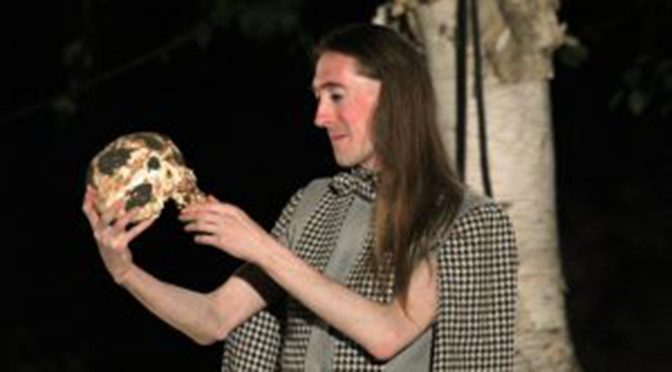 Iris Theatre has become a welcome fixture in Covent Garden over the summer months. Even after a decade, impressively, the company is far from resting on its laurels. Director Daniel Winder is always full of ideas, but this might be his most adventurous production so far. As is the nature of experiments, not everything here works. Yet failings come from the contrast in scale between Shakespeare’s epic and the production itself. Any lack is not a question of carelessness, rather, over-ambition and the production is often fascinating.

Taking the mammoth title role is Jenet Le Lacheur, a performer who identifies as transgender. That the production follows Le Lacheur’s lead makes it feel intensely personal. Hamlet is addressed as son and also “my lady”, adding immeasurably to the character’s complexity. Of course, Shakespeare is full of gender politics but this production becomes extraordinarily layered. To note just one instance, Hamlet’s relationship with Horatio (a fine performance from Harold Addo) becomes especially moving. Le Lacheur’s delivery is admirably direct: the lines feel fresh and easy to understand, making Hamlet appealing and often funny. The performance is one to be proud of and easy to recommend.

Let’s not forget how much goes on in Hamlet. It’s to Wilder’s credit that the action is easy to follow. But the themes that he wants to explore overwhelm his production. The idea of a dystopian future is aimed at but doesn’t hit home – although credit to Madeline Berry’s costume designs, which are intelligently evocative. The idea of a dictatorship never becomes oppressive enough. There’s a lot of messing around with mobile phones and an overreliance on video work. In themselves the films are fine (that Hamlet knows he is observed during his Act III Scene i encounter with Ophelia is a very nice touch) but the outdoor screens are too small or badly positioned. Altering the rotten state in question to England adds little. The military background to events pales and the invading Fortinbras is quite lost. The play’s religious ambiguities seem little explored – ironic given the setting of a church. A definitive production of Hamlet is impossible, but there are too many loose ends here given all the ideas set out.

There’s a similar problem with the tiny cast. That each have so many roles to perform is hugely impressive. Jenny Horsthuis and Joe Parker seem seldom off stage and, if Clare Bloomer and Vinta Morgan stand out, it’s because they have two great moments in their main parts as Claudius and Gertrude. Paula James also benefits from a little more focus with her deftly handled Polonius. To top it all, nearly everyone has a go at the ghost (at least, I think everyone does), showing some top-notch movement skills and wearing a mask that could give you nightmares: praise again for Berry. That the ghost doesn’t speak is one of many smart moves from Wilder, but all the chopping and changing is distracting; the mechanics of the show can’t help but be laid bare as you start wondering how certain scenes are going to be handled given that there are so few people here.

The issue comes to the fore with the travelling actors and the play within the play that they perform. Presented as twerking tragedians, Club Kids with a touch of Leigh Bowery (a third mention here for Berry), is another interesting idea. The cast really go for the avant-garde edge, vogueing away with an unsettling air. But there are just too few of them to make the party atmosphere aimed at work. As with so much here, it’s an excellent effort – and well worth checking out. It just seems that six is too small a cast for Hamlet, especially for a show with so many ideas and so much intelligence.