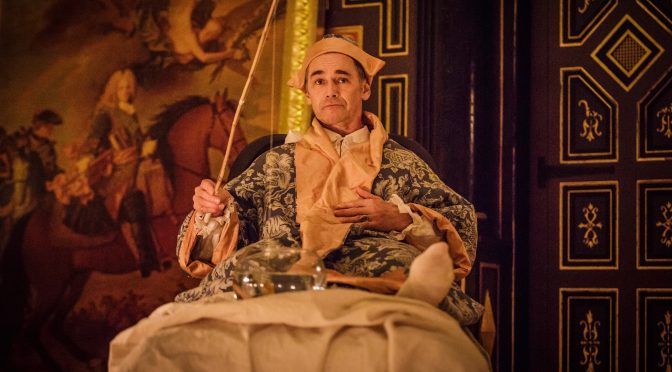 Any trip to the gorgeous Sam Wanamaker Playhouse is exciting. And it’s commendable that the programming for the venue includes brand new plays. You can see why Claire van Kampen’s work, Farinelli And The King, seemed like a good idea: it’s about the famous castrato who sang for Philippe V of Spain and is perfect for highlighting the venue’s terrific acoustics. The Playhouse doesn’t just look enchanting, the sound here is flawless, unforgiving, actually – you can hear a sweet being unwrapped from any seat. Iestyn Davies and William Purefoy have been drafted in to sing, and are joined by some fine musicians, but unfortunately the play they accompany isn’t strong enough to outshine the venue.

Mark Rylance, Van Kampen’s husband, ensures the play is a hot ticket and gives a masterful performance as Philippe, with a seemingly instinctive grasp of what the space needs. His is a remarkably understated and hugely engaging king, but the role is written far too much for laughs. Philippe’s bipolarity, dramatised as simple lunacy, fails to move emotionally. Sam Crane is wasted as Farinelli, whose the role is grossly underdeveloped – a problem shared with one-dimensional secondary parts. At times, the play is more about Philippe’s relationship with his queen, an impression bolstered by a fine performance from Melody Grove. The opportunity for a triangle of relationships is opened up too late.

John Dove’s direction is swift and forceful but the script is just not good enough, being an inconsistent mix of biography and pretension satisfying neither history nor ideas. The bare bones of Farinelli’s fascinating life are delivered dismissively, particularly at the end when the play really runs out of steam. Far too many highfalutin speculations are made about space, time and morality but none is dealt with in any depth. Throw in some lofty theorising about art and you approach incoherence. The obvious comparison with Alan Bennett’s The Madness of King George III is an unfortunate one for this first attempt at playwriting from Van Kampen, who has contributed so much in her capacity as composer for the theatre. Sadly, this is one production to avoid.