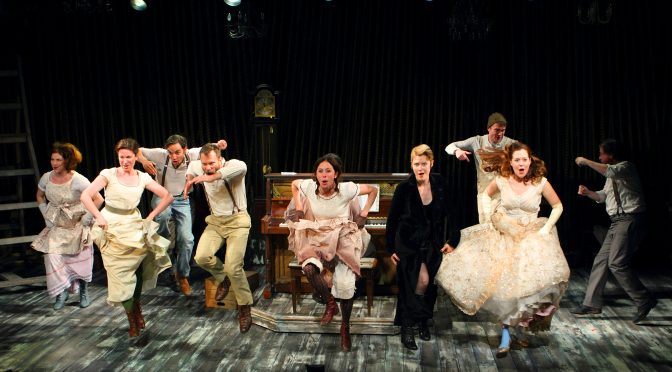 Derek McLane’s set, surrounding the Fiasco Theatre Company as it performs its hit transfer from the States, is a sculptural presence that takes us inside a piano. Discarded keyboards frame the stage and the strings are ropes, suggesting the trees among which James Lapine cleverly mixes and matches fairy tales to Stephen Sondheim’s brilliant music.

Visually and aurally, this is a stripped-back show. A single piano, with an impressive array of percussion and a smattering of other instruments, is performed by the cast, and led by pianist Evan Rees. Sacrifices are inevitable, incidentally discordant notes at the entrée of Act Two are unnecessary, but the singing is all you could wish for, especially with Claire Karpen and Vanessa Reseland as Cinderella and The Witch. There’s some lovely doubling of roles as well. Having the princes perform as the wicked stepsisters is worth sacrificing two sopranos; Noah Brody and Andy Grotelueschen are marvellous, also taking the roles of the wolf and the cow in their stride.

It all seems a casual and convivial affair. The troupe wear home-spun costumes (crochet is always comforting), the props are minimal and the emphasis on invention is, well, jolly. There’s a conversational tone injected by directors Brody and Ben Steinfeld, constructed by having the cast share the role of narrator, while nodding at audience participation and our shared knowledge of the stories. Brilliantly done, but the payoff is to come.

It’s the ‘ever after’ that’s the best bit, when the wishes made have come true but life remains just as complicated. The baker and his wife come into focus – with terrific performances from Steinfeld and Jessie Austrian. This couple are the key and the most relatable characters in the show, even if they do live next to a witch. Fiasco has prepared the ground cleverly; all that complicity and transparency links their stories to our own lives. In showing how you make the make believe, going into these woods feels like a real journey we must all undertake.