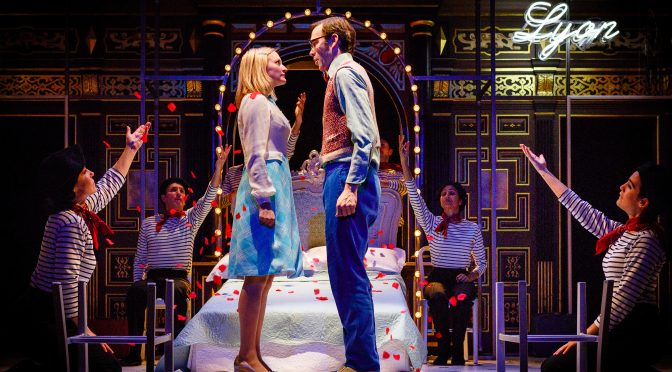 With her last show in charge at Shakespeare’s Globe, Emma Rice is going out in style with a musical romantic comedy that showcases her talents. This adaptation of the French film Les Émotifs Anonymes, is hilarious and heart-warming with a sense of wonder – at stories and making theatre – that is Rice’s trademark appeal.

The story of two chocolate makers falling in love sounds sickly sweet but a big dose of humour prevents any cloying aftertaste. Angélique and Jean-René are pathologically shy – émotif as the French say – and that’s the obstacle they have to overcome to find love. It’s great material for a musical: when the tongue-tied characters can’t speak, they can sing. And the scenario allows the lead performers, Carly Bawden and Dominic Marsh, to win hearts, as we fear and hope alongside them.

You’d be cold indeed not to fall for this fumbling pair. But to cater for cynics, Rice’s book for the show has a cool edge. The therapies tried (including the film’s titular support group) are viciously funny. As is pointed out, the secret of chocolate is a touch of bitterness. So, alongside all the Gallic sensitivity, we have old-fashioned English wit. Even the self-help tape Jean-René listens to loses patience with him! Great jokes and a sense of playfulness mean laughs throughout.

While Bawden and Marsh are brilliant as our emotionally challenged couple, this is the kind of ensemble piece Rice excels with. The often Breton-topped troupe takes on a range of delightful roles. Take your pick: Joanna Riding as Angélique’s uncouth mother, or Gareth Snook as two chocolate shop owners, both male and female. When the cast assemble as the misfit support group, each and every characterisation gets a laugh.

Although the comedy numbers are superb from the start, Michael Kooman’s sophisticated score gets off to a slow start and the lyrics by Christopher Dimond seem serviceable rather than inspired. But, like another description of chocolate from Angélique and Jean-René, the music has a complexity and power that builds.

Despite its everyday story, and a score of satisfying references, Romantics Anonymous is an original. It’s the first new musical at the Sam Wanamaker Playhouse for a start. It glorifies in lo-fi touches, often Rice’s forte, that show each moment approached with fresh intelligence. It revels in the mechanics of theatre, creating complicity with the audience, with a novel self-deprecation. But the underlying, unabashed aim here is to create theatrical magic. And Rice succeeds so well, you feel gratitude for experiencing this great show.