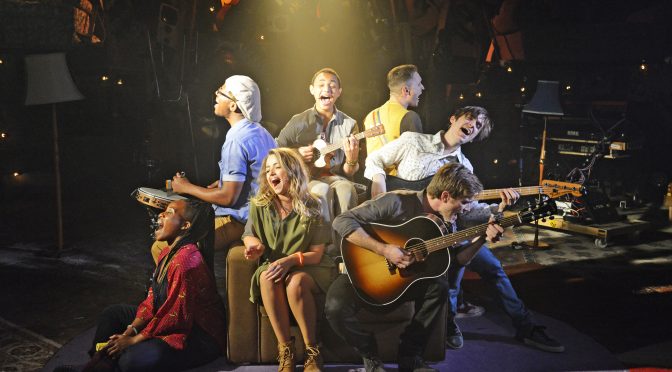 What it’s all about is simple – Burt Bacharach’s wonderful music – somewhat grandly described as “reimagined”. The brainchild of performer and arranger Kyle Riabko, this mash-up of much-altered classic songs takes the idea of a tribute show to a whole other level. It’s a must for fans of good music.

It’s really only theatre in a loose sense – the songs are woven together musically, but there are no detectable themes or stories. Instead, there’s an atmosphere of conviviality and overall relaxation. The show is full of wit and surprises, which are probably more obvious the more you know about the music. And it’s beautifully dressed, with a boho-chic set by Christine Jones and Brett Banakis.

Be warned, though. As an indication of how fresh Riabko’s ear is, the loud guitars proved too much for a couple of visitors. If some of the versions push the songs too far, it is always with the best of intentions and the skill of the performers cannot be questioned – it’s a privilege to hear talent like this.

If you think of these songs as old friends, this is less about revisiting them, and more about learning something new from them. A stirring tribute to Bacharach’s genius, showing how strong the great man’s writing is, it’s no surprise that he’s supported the show. And what more of a recommendation could you want than that? 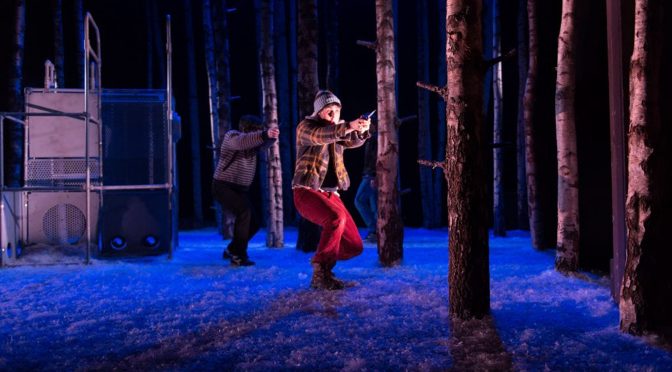 The National Theatre of Scotland are paying a visit to London, to the Royal Court, with their warmly received production, Let the right one in. A superb adaptation by Jack Thorne, of the novel by John Ajvide Lindqvist, made famous by two successful film versions, it deserves unreserved praise for its eminent theatricality. It’s a vampire story with a brain, as well as the usual suspense, and the twist is that this is a story about children.

On stage, we have Martin Quinn as young Oscar, doing a marvellous job at convincing us he is on the brink of puberty. He’s horribly bullied at school, from a broken home and has issues that are only suggested to us (like Oscar, we can’t quite work them out). The supporting roles of school children, mum and dad, are confidently performed and Quinn captivates as the kid in the class we all recognise.

But Oscar’s issues are nothing compared to those of his new friend Eli. She only plays at night, sleeps in a box and lives off blood procured by a creepy father-figure who murders people in the nearby woods. Oscar and Eli’s innocent relationship is… complicated. Rebecca Benson, taking the lead role, gives a luminous performance. Just the right side of ethereal, she injects humour and tension with a physicality that stuns.

All the potent ingredients of vampire mythology that make the genre so popular (and commentators so profuse) are present. There’s no shortage of spine tingling and no skimping on blood capsules. But even better, each encounter between the youngsters increases in tension. The characters are complex, and even Eli’s butchering guardian, played so well by Ewan Stewart, is someone you want to learn more about.

Director John Tiffany’s work ensures the show is not only far more than your average teenage tale but also (and critics always love this one) more than a film on stage. Every aspect of the production emphasises the theatrical: its inventive, high-spec set by Christine Jones, and fantastic sound design, lighting and especially movement that adds immeasurably to the powerful emotions and gives the show an odd beauty.

The grace of the performances, often in scenes of violence, is accompanied by a rousing electronic soundtrack by Ólafur Arnalds – the best music I’ve heard for theatre in a long time. A gory vampire story might make an odd Christmas trip for the family, but this is one that teens might actually like – and that everyone should be impressed with.

Written 6 December 2013 for The London Magazine