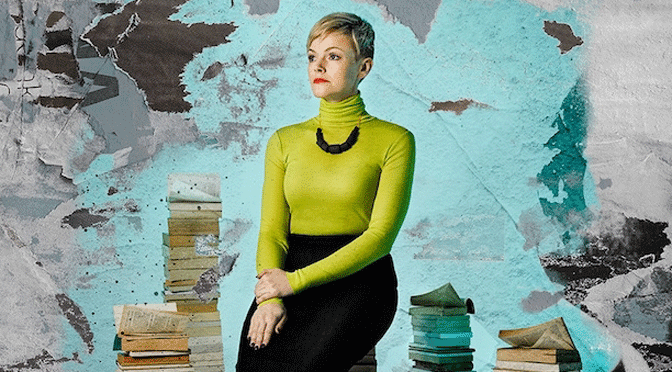 Zinnie Harris’ new play, How To Hold Your Breath, may sound like it provides answers but instead is ambitiously determined to raise questions. A future financial apocalypse is envisaged and a woman has an affair with the devil, in a work combining current affairs and questions of worth in a puzzling fashion. A modern morality play, with a Faustian twist, it’s a work that intrigues but doesn’t satisfy.

The set up has the confident liberal Dana, clumsily presented as an arch capitalist, enduring the traumatic breakdown of European civilisation. At the start it seems Dana’s mistake was to have a one night stand with a demon – and refuse payment when he mistakes her for a prostitute. Then we see Dana is naïve about the world and human nature. There’s humour in the play’s ridiculous moments but any message or satire is far too blunt.

Directed in workmanlike fashion by Vicky Featherstone, even strong acting can’t save the night. Maxine Peake takes the lead giving a magnetic performance of fantastic stamina and adding a depth to Dana that holds the whole play together. Michael Shaeffer is charismatic as the demon and Christine Bottomley superb as Dana’s sister, who joins a desperate descent through a disintegrating Europe. There’s also a librarian who pops up along the way, played by Peter Forbes, who offers self help books to Dana. I am not sure why.

When Harris strikes an emotional chord it’s powerful, the language and imagery unforgettable (black semen…thanks Zinnie). Dana’s devotion to her sister is moving and a scene of miscarriage harrowing. There’s almost a nasty edge to the play’s relentlessness. Events get grimmer and grimier and the result too predictable. By the end, one of the librarian’s instructional books is entitled Which Charity You Should Give To To Make You Feel Better, so it’s clear we should be feeling pretty bad about our self indulgent lives. As for How To Get A Good Seat In The Theatre? Ouch. A gamble, that, with the all too obvious answer – pick a good play for a start.