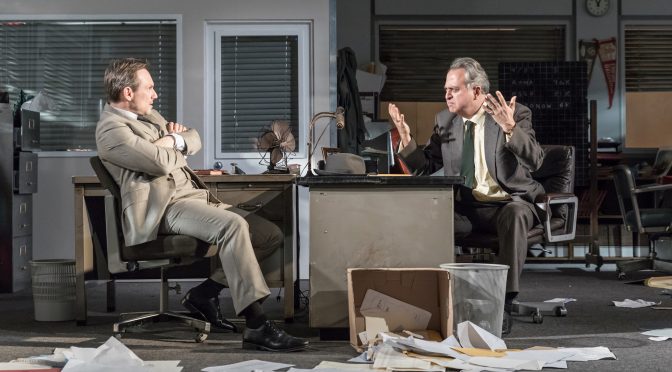 The American playwright David Mamet has plenty of fans. This Pulitzer Prize-winning work from 1984, filmed in 1992, has lines so famous this revival’s smart advertising campaign quotes them. Until now, I’ve never been a huge admirer, finding Mamet’s themes blunt and his language, while powerful, too brutal. But here, Sam Yates’ direction exposes the author’s subtlety, making his production a terrific show for all.

Three intense duologues open the play, introducing us to Chicago real estate agents and their cut-throat world. The scenes are close studies on the part of Yates and his superb cast. Kris Marshall plays the office manager, who has power over the lists of leads he distributes, and he does well in distancing his character from the other workers. Due to the unfortunate indisposition of Robert Glenister, Mark Carlisle takes up the role of a particularly desperate salesman, and proves impressively up to speed, working well in his scene with Don Warrington. The plots hatched and bargains struck are funny in their transparency but there’s no doubt the stakes are high. It’s the brevity that impresses with this trio of sketches – so much atmosphere and characterisation so very quickly.

The star of the production is the fictional company’s top salesman, Ricky Roma, played by Christian Slater, who convinces as someone who could sell the proverbial brick to a drowning man. Slater’s charisma makes for perfect casting, and his mischievous, arch delivery brings out the play’s wicked humour. But there’s more: the real focus of the play is veteran salesman Shelley Levene, nicknamed “the machine”, and next to his old mentor Slater shows an impressive restraint.

Stanley Townsend gives a superb performance as Levene. Technically brilliant, his understanding of Mamet’s rhythm is marvellous, he gets great laughs but also makes the play moving. The brief mentions of his daughter, like all the women in the play never actually named, creates a powerful emotional undertow. This is “a world of men”, but look how troubled it is. Yates draws out the desperation and pressure underlying these workers’ lives, with a nod to the tradition of Arthur Miller and Eugene O’Neill. It’s intelligent insight, convincingly delivered, that makes this a revelatory production.