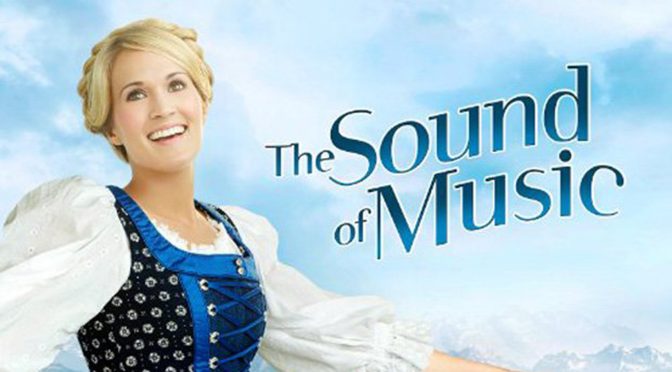 This is the first show in the fund-raising series started off by Andrew Lloyd Webber that is not his work. And while the beloved Rodgers & Hammerstein musical is welcome, it takes me out of my blogging comfort zone! Although presented as ‘live’, this a film directed by Rob Ashford and Beth McCarthy-Miller with little sense of the theatre. Even trickier, it has a very made-for-TV feel.

We can still enjoy the wonderful, hit-filled score and be impressed by the book (from Howard Lindsay and Russel Crouse), which tells the true story of the Von Trapp family singers so expertly. The cast of famous names is attractive and there is a lot of lovely singing here. But this isn’t going to satisfy anyone looking for a theatrical fix as it suffers from a static air that makes you wonder… why not just go for the real film?

The stilted feel doesn’t just come from some unimaginative filming, sets or choreography. It rests mainly with performances that are downright poor. Stephen Moyer’s Captain Von Trapp sounds good but his performance is surprisingly tense and devoid of humour. Perhaps less surprisingly, the children also seem scared, a little too close to the “marching machines” that their fictional father wants them to be.

The exception among the younger roles is Ariane Rinehart, who does a good job at Liesl and the acting gets much better with strong performances from Christian Borle and Laura Benanti – scenes with these two really pick up. But, while it makes a nice reference, the unsolved problem here is Maria. The central performance from Carrie Underwood sounds fine; although her singing lacks nuance, in her defence Maria does make a point of singing loud! But more wooden than the Wienerwald, Underwood’s acting is frequently poor. The whole thing looks such an effort, it becomes painful – surely these lockdown times are tense enough.

Available on The Shows Must Go On! YouTube channel until 23 May 2020