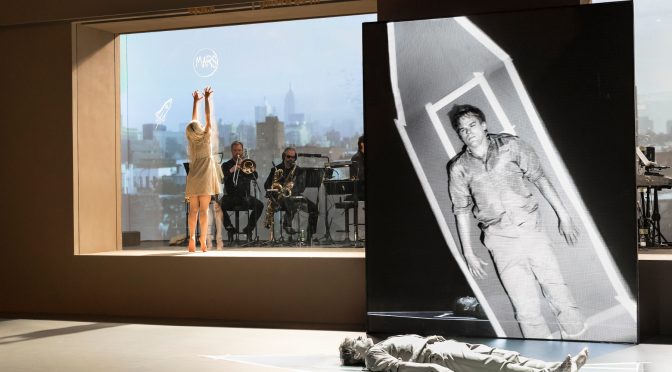 The starting point for David Bowie’s hit musical is Walter Tevis’s book, which was turned into a film by Nicolas Roeg, The Man Who Fell To Earth, which Bowie starred in. And heaven help you if didn’t know that. Lazarus is a sequel, brought up to date, to our own confusing times, following an alien stranded amongst us. Newton the extra terrestrial, stricken by gin-soaked delusions, is homesick and lovelorn. Much, or most, of the action happens within his broken psyche – and remember, this is an alien mind – with characters and events set free from time and described by him as “a dream, a delusion, a chemical belch inside my head”. In his desire to travel home, Newton’s travails are trippy, to say the least.

Given the title, along with Bowie’s untimely passing, it’s obvious that death is the theme here. Impressively, there’s nothing morbid or sentimental about it. Instead, it’s a remarkably objective questioning of mortality, in connection with cognition, that results in an intellectually engaging piece. The guess is that Bowie’s spiritual beliefs are behind a lot of it. Working with playwright Enda Walsh gives the book clout and aids the piece’s strongest feature – originality. If you feared a jukebox musical, rest assured, Lazarus is worlds away from that. There’s original music to enjoy and the Bowie back catalogue used is incorporated with wonderful ingenuity. It’s a shame that overall, (space) oddity is revelled in a little too much.

Michael C Hall takes the lead with a studied performance that’s impressively agile, utterly committed and shows a voice that uncannily approaches Bowie’s own. But the role of Newton overwhelms other characters. Only Michael Esper comes close, injecting passion and some much needed humour into the devilish role of a psychotic called Valentine. Quite what the character is there for is one of many opaque points. Strange it all is. Relentlessly. Ivo van Hove directs, relying heavily on a central screen and video projections (courtesy of Tal Yarden) that are the key to Jan Versweyveld’s cool design, along with the choreography of Annie-B Parson. It has to be stressed that the filmic extras are among the best you could see on stage. And the movement is brilliant. Van Hove creates startling images. But, combined with the uncharismatic temporary venue that houses the show, it’s all too reminiscent of a music video and strangely one note-monotonous in its intensity, despite all that novelty.