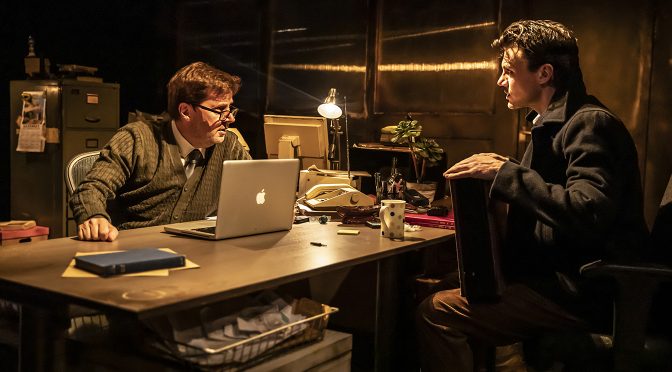 The promise of a spine-chilling ghost story is always welcome, and this show has not one but five spooky tales, which surely counts as good value.

The spectres range from the 17th century to the present day, framed within the device of a local Guernsey historian, one John Blondel, vlogging. There’s a lot of history – including witch hunts and pirates – that will have you Googling background stories afterwards. The carefully constructed script, from Paul Morrissey and James Milton, plays with setting up connections between the stories well.

Morrissey and Milton want just the right amount of sensation to distinguish the narrator, Blondel’s vlog guest, from your average journalist. They have their reasons. A newspaper’s approach to ghost stories is said to be “short, cheap, generic, repetitive” – avoiding all that creates a script that is a solid, traditional affair. If the dialogue isn’t shy of clichés, they are justified in adding to the atmosphere.

In short, the tales are good. And the telling is even better. These aren’t easy roles. Blondel is presented, at first, as a too-predictable sceptic. Attempts to lighten the mood are a misstep on Morrissey and Milton’s part. And a potential plot spoiler…

‘The Speaker’ is a little too obviously otherworldly. This isn’t really hidden (should it be?). Don’t worry, as there are more than enough twists to come.

While the characters aren’t perfect, the performances are. Will Barton works hard as Blondel suggesting an underlying fear with great skill. Participating in the stories – as a character as well as a commentator – impresses further. As The Speaker, Alex Phelps mixes vulnerability with a delicious sense of menace, and manages to vary a performance that could all too easily be static. Above all, Phelps is a great storyteller.

Further aiding effectiveness is Morrissey’s direction and some particularly strong sound design from Daniel Higgott. Wind, whistles and screaming might not be particularly original, but they work. Even better, Higgott appreciates the power of silence and uses it to create tension very well indeed. Excitement and interest are present throughout this quality show. Chilling spines is harder but, if When Darkness Falls doesn’t quite manage that, it is still sure to entertain.