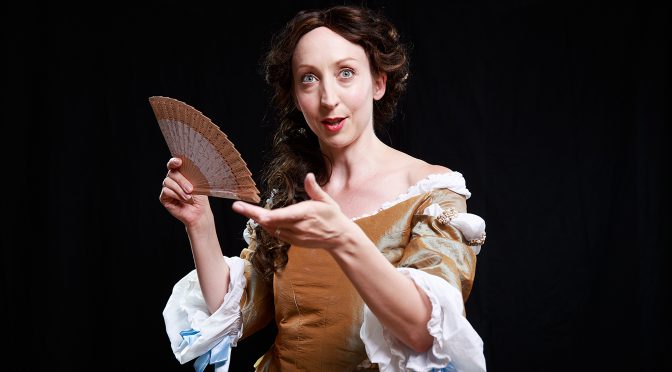 Claire Louise Amias’ one-woman show about Restoration writer Aphra Behn is a careful mix of period drama and biography. The trick with plays that look at playwrights is to decide how to balance education with entertainment – and Amias tackles her task with determination.

There is a lot of history… but it’s all about Behn. The show is easy on the broader context, so it doesn’t really matter how much you already know. And filling in details is done with humour – a reference to “my friend Nell Gwyn” made me laugh. And apart from writing plays and poetry, Behn had a fascinating life as a spy, which Amiens speculates on brilliantly.

From her early youth and then as a wit in Charles II’s court, Behn takes us on her adventures in Suriname, Antwerp and Venice. It’s all exciting stuff with considerable peril involved – quite simply, a great story. Imagining how a larger cast could work is not a distraction, as Amias takes on extra roles very well, vividly depicting the rogues and plotters Behn meets along the way.

The plot is so strong that it might be said to be a little overpowering. There isn’t much room for how Behn’s life and work interact – apart from her need for money. This is a pressing concern expressed in detail and used for dramatic purposes, but it is hardly a revelation. The masks in the title only play a part at the end, leading to a rushed conclusion. The idea could have added more weight to the show.

Still, Amias gets to show off her acting skills superbly and does justice to a fascinating figure. And she interacts well with her audience: we are the “witty few” at the theatre to see a production of her play The Rover. But, due to the ‘indisposition’ of an actor, we are offered Behn’s story instead – ”for one night only”, of course. She’ll do anything but offer a refund! The atmosphere is intimate, relaxed, and fun, despite Behn’s trials.

Direction from Pradeep Jey helps. The play is understandably static, but there’s plenty of energy and the time flies by. Behn loves scandal and Amias’ eyes light up at gossip. Any danger is balanced with a dry edge (especially when it comes to her mother), which leads to plenty of laughs. It’s all out for entertainment. As such, the show is a success – and deserves the kind of big box office that would have delighted its subject.