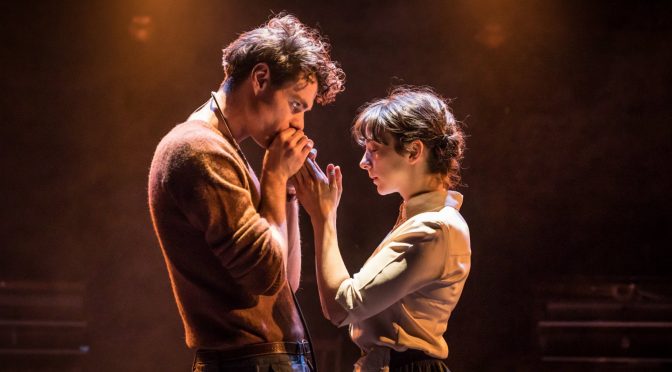 The youthful courtships in Tennessee Williams’ plays are usually things of the past – recounted by his formidable heroines. Here the action unfolds before us and whether the affair between minister’s daughter Alma and her next-door neighbour John will evolve is filled with an exciting tension… if you’re an optimist or haven’t seem much Williams. Sense-talking Alma is hugely sympathetic, while John is sensitive and passionate, a doctor making a mess of his youth. Presented as two extremes of spirituality and physicality, a compromise between them would be good for both. It’d be nice if it worked out.

There isn’t a party at the end, sorry, and the 1948 play’s reputation isn’t much celebrated either. But this production is so strong it takes us well into the second act to see why. After an electrifying argument as John’s father lies murdered (I didn’t say there was no melodrama), the play drags its feet, harps on about unrequited love and becomes, well, mopey. Alma was, reportedly, Williams’ favourite heroine – her fire and fierce intelligence makes this understandable – but while the performance here, from Patsy Ferran, does her justice, Alma deserves better than the end she had written for her.

Unlike the play, the production is faultless. Rebecca Frecknall has directed the piece before and her close knowledge proves invaluable. Matthew Needham delivers a fine performance as John, who is filled with sexual frustration and confusion. Despite cruelties and misogynistic remarks, the attraction is clear. Using the play’s motif of doppelgängers Frecknall doubles her cast cleverly, which feels like a defining way to stage the show. And taking multiple roles as various love rivals to Alma means Anjana Vasan really gets to shine. The staging is simple yet beautiful, taking inspiration from Williams’ experimental works. Few props and no costume changes, just seven pianos forming a semi-circle and accompanying music from Angus MacRae that adds to the atmosphere immeasurably.

As for Ferran, she’s so good she gets her own paragraph here. Ferran’s performance is career making: she inhabits Alma but makes us question the character’s self-definition as “weak and divided”. Her physical frailty is painful to watch. Depicting the degeneration of her health is astounding and Alma’s struggle against illness both moving and determined. Ferran can even inject a sly humour, with a suggestive eyebrow that’s a great asset. Cast in a show that’s as smart as she clearly is, the combination is a production that makes as forceful a case for this flawed masterpiece as Williams himself could have wished for.