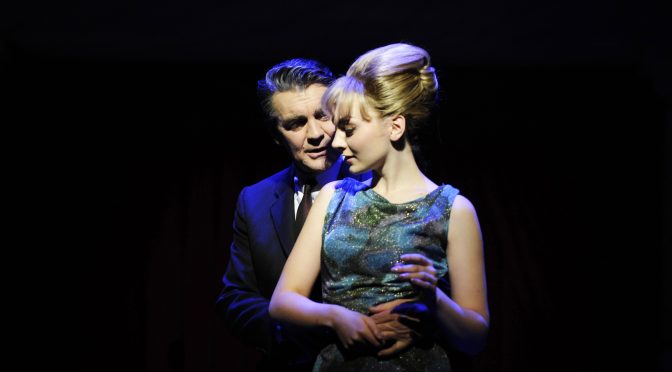 Let’s face it, Stephen Ward is a terrible name for a show and, given that its eponymous subject ends shamed and committing suicide, it’s also an unlikely topic for a West End musical. But Andrew Lloyd Webber’s new work deserves the kind words received from critics. An adult affair, looking at the 60s Profumo scandal, the focus is on hypocrisy and injustice – on how revenge was meted out to Ward by the upper classes he once counted as friends.

The show’s credentials are impeccable. Lloyd Webber’s score lives up to his reputation and the book and lyrics are provided by Don Black and Christopher Hampton. This is a complicated story presented in exemplary fashion, with startlingly confident lyrics and efficient directing by Trevor Nunn.

The show rests on the lead and Alexander Hanson is terrific at conveying the complexity of this “man of many parts”. And Charlotte Spencer and Charlotte Blackledge (above with Hanson) depict the more famous stars of the real-life drama, Christine Keeler and Mandy Rice Davies, with depth. Secondary characters also satisfy: Anthony Calf is perfect as Ward’s fair-weather friend Lord Astor and there’s a tremendous turn from Joanna Riding as Profumo’s wife. It’s a lovely twist to see the betrayed minister’s spouse get to have her say.

The show isn’t perfect – rousing emotion has to wait until the end (Hanson again delivers) and this seems too late. Attempts at humour when it comes to both Keeler’s Russian lover and the police who frame Ward on a trumped-up charge are frankly embarrassing.

Stephen Ward has a quiet ambition. A concise, penetrating view of British culture, it scores many a hit. The scene of an upper-class orgy may raise eyebrows amongst Lloyd Webber fans but, sensibly, it doesn’t try to shock. There may be some Coco de Mer style accessories on sale in the foyer (a riding crop and silk blindfold) but humour is used well here. Another highlight is a song for The News of the World journalists, set to twist Keeler’s kiss and tell story, demanding she “give us something juicy”. Keller’s lyrics go further than the hacks are willing to print, but Lloyd Webber and his team don’t shy away from the explicit – even crudity is used intelligently in this smart work.

Written 23 December 2013 for The London Magazine