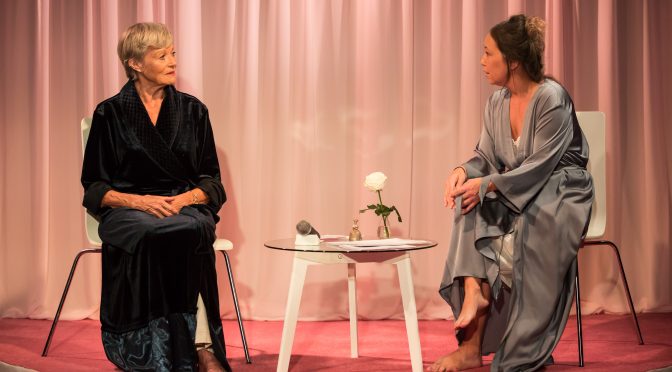 The headline show of this venue’s Queer Season, this is an evening of two one-act plays by Tennessee Williams. While celebrating their iconic writer, the programme is a triumph for promoting its director, Jamie Armitage. Williams isn’t easy to control, putting directors under a glaring spotlight, but Armitage turns that around to examine the author himself.

First up is Something Unspoken, easily seen as classic Williams territory. A grand dame of the American South and her long-standing secretary are a couple skirting around their unacknowledged intimacy, with pathos and humour, that makes a riveting confrontation. Annabel Leventon takes the lead as the wealthy Cornelia Scott and excels with the acid one-liners. Fiona Marr is moving as the companion for this formidable matron, a timid figure next to her iron lady. The sentiment and silence that prove so fecund for Williams are balanced perfectly by Armitage. The high quality is evident in its subplot, the election for presidency of the Daughters of the Confederacy – easily dismissed as a joke, both actresses parallel the tension in their relationship with Scott’s failure to secure the position.

And Tell Sad Stories of the Deaths of Queens is the more notable piece. We’re told it’s the only work in the Williams canon to contain openly gay characters. Armitage has secured similarly strong performances, with Luke Mullins performing as Candy, a transvestite who pursues a straight sailor, played by George Fletcher. It’s undoubtedly fascinating, but there is a marked drop in standard. Candy is too much the focus of the writing, which might be forgiven if it didn’t make the piece slow, repetitive and predictable. A pathetic figure in the true meaning of the word, Mullins manages – against the odds – to carve out some dignity for the character. But there is little tension in the piece, despite it being more action packed, as Williams’ own self-loathing clouds his judgement.

There’s a trade off with this second short – a balance between theatre history, its potential as a documentary of sorts and the author’s biography and bias – that make it interesting to watch rather than enjoyable. But, on the whole, the plays complement one another nicely. They illustrate a past experience of lesbian and gay life. But they also present us with the author as we know him and then offer new insight into his writing. Showing Williams both in control and then with a degree of abandon makes this a treat for his fans.