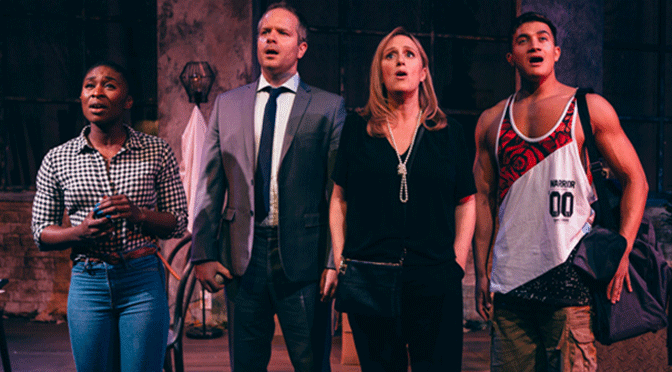 Jason Robert Brown is a composer known for his clever musicals and skilled songwriting, both evident in Adam Lenson’s 20th anniversary revival of his first work, Songs For A New World. A song cycle, rather than ‘proper’ musical, it has numbers set in distant ages and places, mixed with those about relationships that could be from any time and anywhere. The songs are connected by a moment when a life changes and a character develops. Startling and original, it’s the music’s instant appeal and variety, rather than the concept, that is the real highlight.

Lenson has some nice touches to suggest the fluidity the show aims for, but he never distracts attention from the performers – wise, as the four stars on stage are truly stellar. They sound better singing solo than as a group, but their voices are fantastic. First the boys – Damian Humbley and Dean John-Wilson – with songs of depression and ambition, often linked by the mistakes of fathers, perfectly delivered. Then Cynthia Erivo, who sounds appropriately heavenly as a woman who sings about her pregnancy and has a wonderful stage presence. But since I’m such a fan, Jenna Russell was my favourite, with the show’s funniest numbers: a suicidal rich bitch and the desperate wife of Santa Claus.

Yet even with performances like these, it’s frustrating to hunt for themes and connections when you really just want to enjoy the music. Songs For A New World feels like a collection of musicals waiting to break out rather than its bolder aim of something abstract. You want each song to develop – they sound so great. And each character introduced is one you want to know better. A surfeit of talent perhaps, the piece is more a soundtrack to love than a show to see.