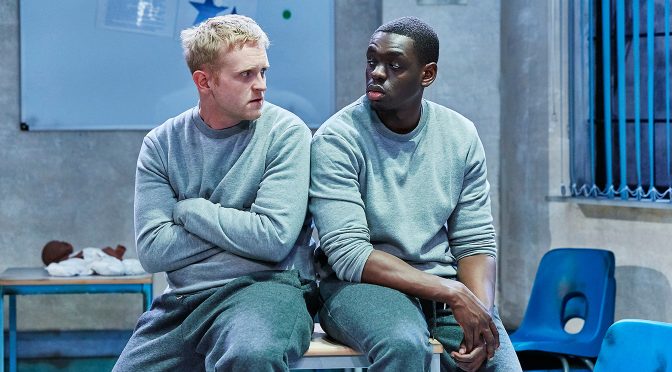 Samuel Bailey’s play is deservedly multi-award winning. Not only did Bailey receive the prestigious Papatango new writing prize for it but, in 2019, accolades followed a run at Southwark Playhouse. While Covid-19 prevented a scheduled transfer to the West End, thankfully, a filmed production is now available.

Following three young offenders due to become fathers and taking parenting classes in prison, the play is unsurprisingly bleak. Learning the histories of Riyad, Jonjo and Cain is tough. Bailey highlights how abuse, poor education, mental health and gang culture affect them. But none of these topics is imposed on the play. Flowing from the true stories that inspired Bailey, his writing does justice to painful experiences.

That all three characters are resigned to so many of their problems makes Shook strangely disturbing. As with the violence – the “biting, punching, kicking” – that we hear about, and the misogyny and homophobia we listen in to, a lack of life chances is taken for granted. Futures are pretty predetermined. The shocking ignorance that these men suffer from is relentlessly exposed. Riyad’s ambitions are simply a source of pain to him, while Cain’s remark that “nothing good comes of thinking” proves haunting.

Having so few choices that being institutionalised seems a viable option is truly depressing. Director George Turvey does well with moments of light relief, keeping them firmly under control. Best of all, strong characterisations involve the audience and prevent the piece descending into any kind of ‘poverty porn’. The cast are able to develop their roles magnificently. Josef Davies’ Jonjo is catatonic at first. Josh Finan’s Cain, with his fevered energy, moves from talking too much to asking powerful questions. But the play’s lynchpin is Riyad. Ivan Oyik is fantastic in the role: weaving the exercise of petty power over fellow inmates with underlying insecurities.

If there’s a flaw in Shook, it’s that the men’s teacher, Grace, is underwritten. As a result, Andrea Hall’s admirable performance feels wasted. Likewise, I’ve a suspicion that an oft mentioned off-stage character, Jake, is supposed to be more vivid. Or maybe it’s appropriate that those trying to help the men remain shadowy figures? There’s certainly a sense they will achieve little despite their attempts.

An effort that does pay off is to bring the audience increasingly close to the characters. All involved in Shook should be proud of this achievement. Likewise, bringing the characters themselves closer, into a circle of support and friendship, is skilfully managed. It makes learning what each misses all the more moving. Things big and small – from the details of their lives to the lives they are excluded from – run throughout the play, including, most touchingly, wanting a hug. My advice is simple: be sure not to miss Shook.