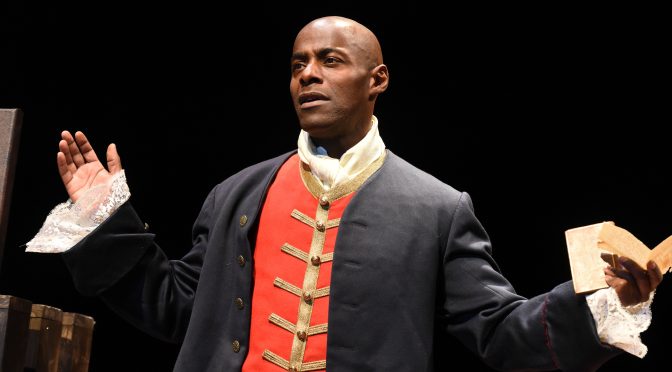 As an introduction to his first play, the respected actor Paterson Joseph says hello as himself and sets an amiable tone. Explaining he wanted to appear in a costume drama, but wasn’t cast because of his race, he has taken the admirable step of making his own. Transforming into the 18th-century gentleman Charles Ignatius Sancho – he seems to put on weight for the corpulent character as you watch – the author, actor and subject are combined to cast a suitably charismatic spell.

Sancho is not unknown. His portrait by Thomas Gainsborough is in the National Gallery of Canada and art historians have paid it considerable attention. The play includes Sancho sitting for the portrait, an intelligent device to display his personality and kick off a recounting of his fascinating life. He was an actor, a musician, a valet, a man of letters and, finally, a grocer. And getting to know the man becomes a real treat: he’s an epicurean and wit, full of idiosyncrasies and a dash of camp that make you want to share a syllabub with him… although he would probably want one to himself.

A lightness of touch belies the play’s testimony of racism and the fact that it is a great history lesson. Taking us from Sancho’s childhood through to his old age the show is, somewhat self-consciously, a tour de force for an actor. But having already extensively toured, Joseph is in relaxed control of his one-man show and reveals himself to be a great entertainer, appealing and encouraging the crowd. Joseph’s skill as a writer is to combine, with clarity, the casual cruelties his subject faced with the systemic prejudice of his times. It’s also fascinating to see, before we start feeling too superior, an 18th-century ideal of masculinity; to note how being a true man was associated with education and refinement. This close study culminates in a moving finale that elevates the piece to a play you feel everyone should see: as Sancho secures his place in history, in 1780, in Westminster – as the first Afro-British person to vote. It’s a fact worth remembering, and one that Joseph makes feel alive and important.