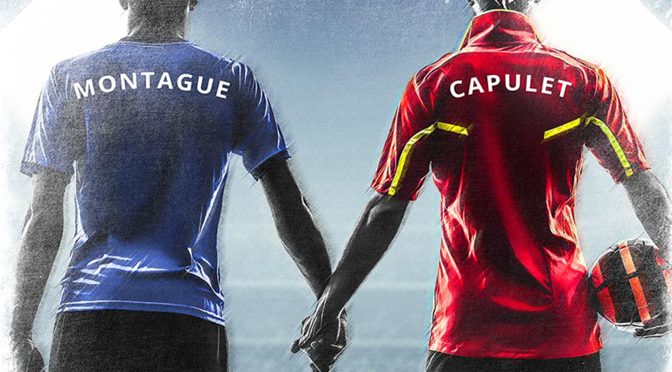 Like Daniel Kramer’s production of the same play, currently showing at the Globe, Andy Bewley reimagines Shakespeare in a radical fashion. Here the most famous lovers in the world are men. And they and their families are rival football fans. Think Beautiful Thing with the beautiful game thrown in. Both ideas are interesting – bravo for originality – but neither works that convincingly. Put together, the creative team have too much to tackle.

As Joe M. Mackenzie’s credit for dramaturgy and adaptation indicates, the production is a version of Shakespeare. A lot of text is left out. I suspect the inspiration is the scene of Romeo and Juliet’s marriage night – enchantingly transformed using movement rather than verse. Other cuts should have been as bold. Predictably, changing the genders becomes messy. Maybe I’m missing a point but why not just change Juliet’s name to Julian?

Even more puzzling, the novel ideas don’t do much. Everyone is remarkably comfortable about the men’s sexuality and apart from some empty pint glasses, these football fans are pretty refined. Which is lovely…but avoiding the chance for extra drama seems odd. The ball skills shown off impress and Mercutio’s Balotelli t-shirt is a nice touch. But the sporting veneer adds little. Dropping it leads to a strong final scene; the action in the tomb plays like an unfolding news story, all the cast are used well, and a feeling of chaos is skilfully constructed.

Best of all, there are some fine performances here. Bewley is a careful, even-handed director with his cast. There is an air of earnestness that flattens some characters but all roles are well delivered. Gabrielle Nellis-Pain is a hard working nurse, Allegra Marland does very well as Paris and Celeste De Veazey makes the often-neglected role of Benvolio stand out. Sam Perry’s Juliet is impressively sweet; he is good at bringing some caution to the role, showing a timidity that’s seldom expressed. Abram Rooney’s Romeo has a down-to-earth delivery that is captivating, with brilliantly petulant touches. The scene of Romeo’s banishment – snotty tears and all – shows great talent. It’s the leading men that that really score.