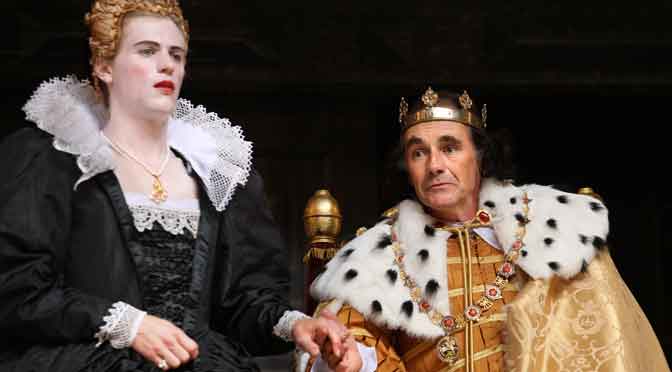 Mark Rylance, former artistic director of Shakespeare’s Globe, makes his return to the theatre in the title role of Richard III. The play is always a star vehicle, and Rylance’s Richard is a stuttering, often jovial figure who gets plenty of laughs. Playing with the theatricality of his character, a smart move that suits Rylance, his conspiratorial tone delights. It takes time to appreciate Richard’s darkness, but when he chooses, Rylance shows a startling, unashamedly psychotic King, making sure his depiction will be one to go down in theatre history.

Alongside Rylance the whole production, under the direction of Tim Carroll, shows skilful pacing. The speed of the action is breakneck but the riveting ensemble seize the attention masterfully. Special notice must go to Roger Lloyd Pack as the King-maker Buckingham, matching Richard in his cynical malevolence up to the point of murdering the princes in the Tower: when Lloyd Pack exits to consider the usurping King’s request, it is a moment of great tension, superbly performed.

This is an all-male production. Without revisiting the debate on this approach, and stressing that those taking on female roles give superb performances (especially Johnny Flynn, who plays Richard’s unwilling wife Anne), the move is indicative of a traditional approach to the play. There’s no dwelling on the history here or the superstition rife in early modern society – Shakespeare took both for granted after all. The emphasis is on drama and entertainment.

Thoroughly at home on his old stomping ground, Rylance leads the cast in exploiting the dominant feature of the Globe – its ability to encourage audience participation. Whether it’s knowing glances that create complicity or shared outrage at Richard’s demonic actions, Carroll’s production is always engaging. With direct appeals for cheers as he is encouraged to take the throne, Richard gets the applause Shakespeare’s play has denied him as a figure in history – in the case of this production, the cheers are well deserved.

Written 26 July 2012 for The London Magazine