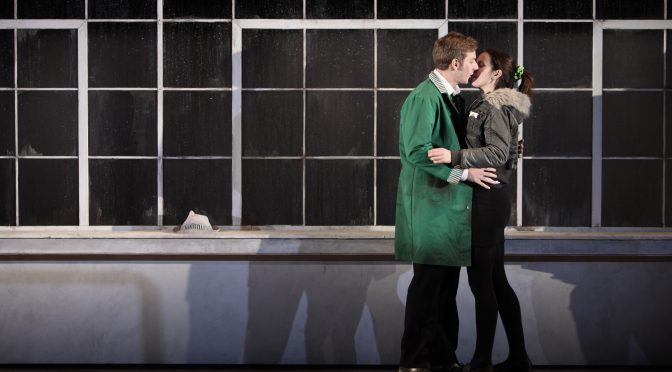 Following the success of their production of The Curious Incident (which transfers to the Apollo Theatre in March) it feels as if the National Theatre is rewarding writer Simon Stephens and director Marianne Elliott with a revival of the 1992 play, Port, which they first worked on in Manchester. Set in Stockport, where they both grew up, it’s a piece close to their hearts – indeed the whole play is sincere to a fault.

Fulfilling plenty of prejudices Londoners might have about the north, Port is a grim affair that traces the life of Racheal from 11 to 23. The poor girl’s trauma starts early when her mother abandons her. And things don’t get much better as she moves into dismal jobs and abusive relationships. Everyday Stockport is dysfunctional and depressing, its inhabitants desperate and cruel as they stumble through life.

You can see why the play has its advocates. Stephens’ expletive-filled language has its own kind of beauty – full of skilled observations and rich imagery. And he has written wonderful roles: from Rachael’s mum, who only appears in the first scene and is performed skilfully by Liz White, to the lead, played from child to woman by Kate O’Flynn in a remarkable performance that can’t be praised enough. But the play is so bleak that it becomes monochrome and, under Elliott’s static direction, monotonous.

Giving away whether or not Rachael sets sail for brighter shores would be to ruin what little tension Port has and unfortunately the ending feels tacked on and unconvincing. Sadly, despite the commitment of the cast, it is unlikely that Port will win many hearts.

Written 1 February 2013 for The London Magazine