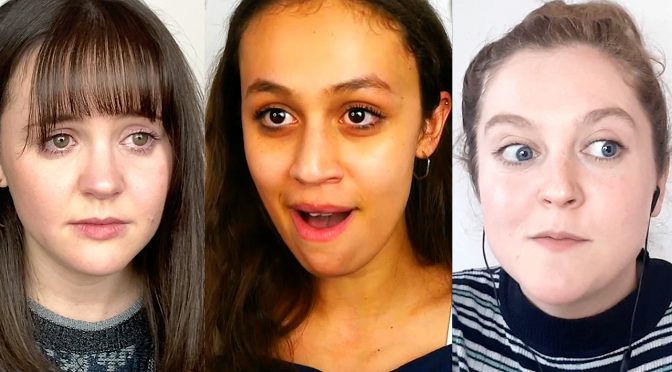 Julia Grogan’s provocative new drama is the exciting winner of the ETPEP Prize and has been given an online rehearsed reading that downright demands a full production soon. A startlingly bold coming-of-age story with very serious concerns (and extremely frank content), Playfight comes close to a jeremiad and must be any parents’ nightmare.

The play’s three school friends talk bluntly about sex, death, love and religion. There’s humour of a kind here, although deadpan responses are relied on too much. First loves and a deep desire to work out what is “normal” prove touching. And it’s never in doubt that the characters of Kiera, Zainab and Lucy are “full of promise”. That potential is a fact that makes the play extremly depressing.

As well as orgasms and excitement about the future, it is the issues Grogan highlights that dominate. And these are truly shocking. Alongside teenage troubles with faith and sexuality (we expect that, right?) relationships to sex are seriously skewed. The acceptance of hard-core pornography and violence is disturbing. “Shame, blame and guilt” don’t just belong to Lucy’s church. Self-harming, homophobia and alcoholic parents seem almost tacked on as a grim backdrop to everyday life – it is physical violence that destroys all three young lives.

The performers – Robyn Cara, Hannah Millward and Helen Monks – work wonders with their character’s emotional ups and downs. There’s no lack of drama, so the generally underplayed tone and tight control shown in Blanche McIntyre’s direction are essential. Extra credit, of course, comes from the fact that the performers are working in isolation. Even though the piece has plenty of scenes that are phone calls, it’s impossible not to imagine how much more effective it would be – let’s hope will be – on a stage.

Playfight isn’t perfect. A central motif of an oak tree is over-burdened metaphorically and an attempt at basing some metaphysical speculation around its age fails to convince (although I’d love to see what a set designer could add). The much-discussed small-town setting is too vague, so what impact this might have had on the characters gets lost. The powerful energy in the play escalates with such rapidity that conclusion lacks control. But maybe that was the intention? Grogan’s work left me uncomfortably breathless and a play this urgent, aiming to spark so much debate, deserves a wide audience.