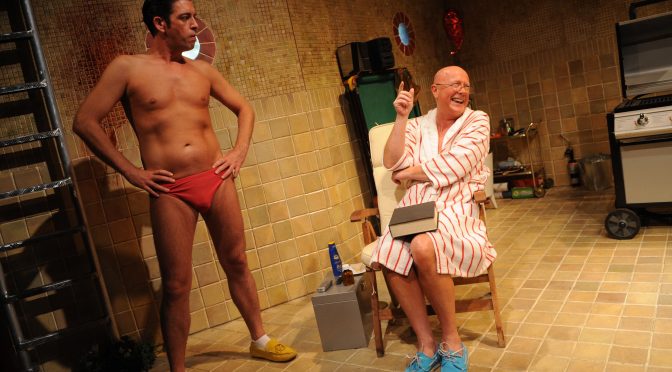 Ever wondered what Penelope’s suitors got up to during Odysseus’ absence? We know they were swiftly dispatched on the traveller’s return, punished for making a mess of the house and forcing his wife into all those pointless hours over the loom. But Enda Walsh’s Penelope takes a deeper look at these men in a startlingly novel play that reimagines Homer’s world.

To add tension, those hoping to step into Odysseus’ conjugal sandals know he is about to return and how he will punish them – the Gods have delivered a barbecue they will be roasted on. Penelope’s beaus have decamped to a drained swimming pool from where they serenade her via CCTV.

In a series of brave performances the cast declare their love and Walsh investigates the limits of their language. Ageing lothario Dunne fancies himself as a poet, but Denis Conway’s spirited performance has his speech degenerate into anger. The elderly Fitz (Niall Buggy) flirts with philosophy. His speech is moving, but only shows how empty words can be.

A third attempt is the unluckiest of all. Karl Shiels’s Quinn performs a manic mime act with impressive comedic prowess but it’s the last straw for his rival Burns (Aaron Monaghan) – he may look like “an emaciated kidney after a long day’s filtering”, but grasping that love can exist even in this strange place makes the lies they are all telling intolerable.

It’s part of Walsh’s point that none of these men are likeable. Faced with these serenades anyone would take up the shuttle. The open question – are they irredeemable? Unfortunately, with little empathy towards them, no matter how unusual Penelope is, the play struggles to engage you.

It’s easy to see why so many admire Walsh. He is a writer never short of ideas with an exciting grasp of rhythm. His bold voice is sometimes obscene and scatological, mostly for comedic effect, but there’s intelligence here so fierce it can be overwhelming. Having been so successful on tour, this London run of Penelope at Hampstead allows the capital’s audiences a valuable chance to see an award-winning play.