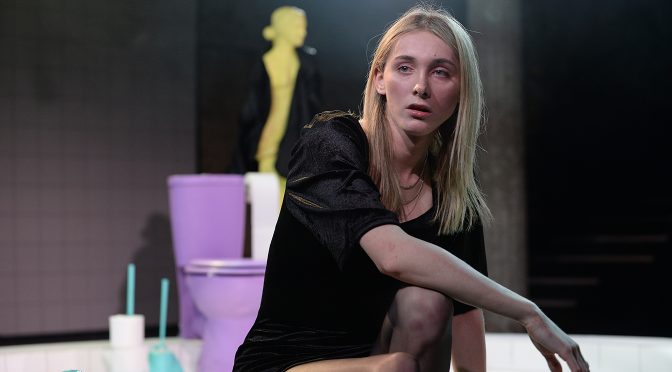 Trans activist Travis Alabanza’s new play is set entirely in a toilet. Given that public conveniences are currently contested places the location is, if a little depressing, appropriate enough. But what Alabanza does within this limited space, and what is achieved with the play’s careful focus, is remarkable.

A theatre blog isn’t the best place to discuss trans rights. Like the Twitter comments Alabanza’s character Rosie decries, the issues are complex and emotive. And this play certainly manages to speak more eloquently about them than I could. Theatre, in Alabanza’s hands, proves a stirring forum: the argument put forward is intelligent and elaborated with a human experience that makes for a powerful show.

The key is Rosie, a well-written character brought to life in a strong performance from Reece Lyons, ably directed by Debbie Hannan. Smart, sharp and often witty, Rosie proves a fascinating guide as we learn her history – fun and fraught – through different toilets. From hiding as a child, to school pranks, then discovering her identity in night clubs, the space performs more functions than I at least ever imagined. The smallest room was a place of sanctuary… until recently.

Alabanza provides an essential dramatic twist for Overflow. For it seems that Rosie’s experience of toilets has got worse as society commends itself for being more liberal. The show is punctuated by knocks on the door from men waiting outside; Rosie is under threat. There are also discussions of how women have become more hostile to Rosie, making the space she considers her own one that she now wants to wreck.

The rage that culminates in the destruction of Max Johns’ clever set – the circular shape recalling an arena, adding to the drama – becomes understandable and also moving. And touches of bravado to hide her fear deliberately fail to convince: this isn’t what Rosie wants, rather the wish is to “swim not drown” in these metaphorical waters. It’s Rosie’s address to women – an appeal to sisterhood – carefully drawn together as the piece culminates, that provides Alabanza’s strongest points. And a hope for a kinder future.