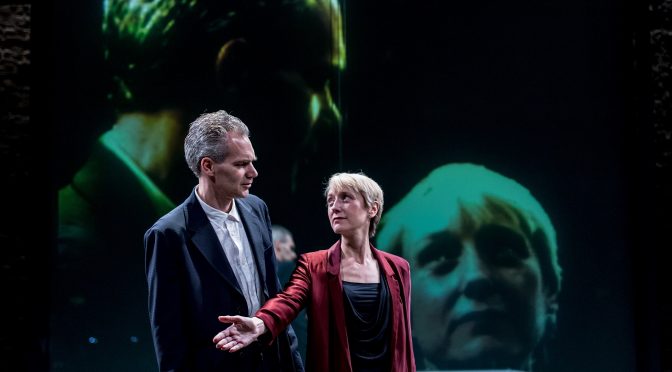 A sterling start to the Almeida’s Greek season, Robert Icke’s new version of the Oresteia is a mammoth achievement, presenting all three plays in one spirited and, at times, gruelling evening, where the trilogy’s themes of society and justice come alive in a stirring, contemporary fashion.

Agamemnon comes first, the king powerfully portrayed by Angus Wright as a politician, military leader and man of faith, who sacrifices his daughter Iphigenia before setting out for Troy. The murder occurs onstage, which some will find objectionable in itself, but for me the clinical approach of feeding the young actress some pills makes the scene so brutal I cannot say I fully support the decision to show it.

After a break that is strictly timed by a countdown on television screens, Clytemnestra comes to the fore. Consummately controlled, plotting to kill her husband as revenge, Lia Williams is mesmerising in the role, her exclamation that “the war came home” emphasising the consequences of battle abroad on the families left behind.

For the second play, The Libation Bearer, we see Orestes avenge his father by killing his mother. Previously presented as undergoing therapy, he joins forces with his sister Electra, with Jessica Brown Findlay making a forceful stage debut, the highlight of which forms a meditation on mourning. The fate of Electra later brings a penny-drops-twist from Icke that doesn’t deserve a plot spoiler.

The Eumenides sees the judgment upon Orestes for his matricide. Wright and Williams, reappearing as legal council, aid high emotions, and issues of gender are satisfyingly forefronted. But the scene rests too heavily on Luke Thompson’s fraught performance in the title role. At least those countdowns make sense – it wasn’t just to hurry people’s G&Ts – we have been watching a re-enactment in real-time. Instead of being treated, Orestes was being cross-examined.

It’s possible the production is too stylish for its own good. Hildegard Bechtler’s design, with its ghostly sliding glass that becomes opaque, looks so great that, combined with the moody background soundtrack, it becomes slightly distracting. And having live recordings played back onto screens may illustrate the public nature of this family, but it’s becoming a bit of a theatrical gimmick.

Reservations are small compared with the scale of Icke’s accomplishment. The dialogue is modern and easy to follow, with references to Whitman and even G&S. Icke is obsessive about retelling these stories, which justifies the liberties he has taken but also aids the coherence of his production; the omnipresent reiteration of concerns for signs, stories and interpretation is clear, convincing and engaging.