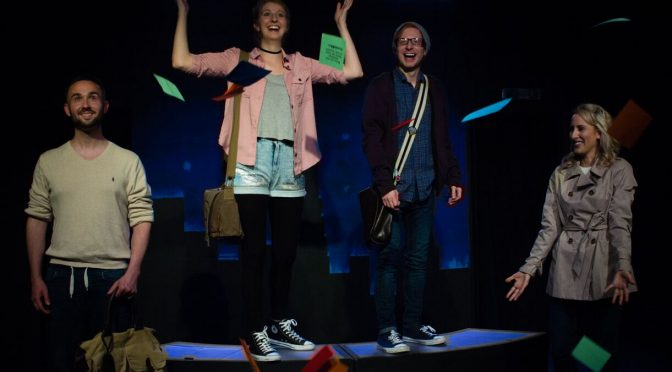 Adam Gwon’s tyro musical from 2008 has a special place in many hearts. Presenting the lives of four everyday New Yorkers, with the ambition of making the prosaic poetic, it’s full of enthusiasm, hearts on sleeves and clever comedy. A budding friendship and a struggling romance, with meditations on art and urban life, fused by super piano score, make this a short but fulfilling gem of a show.

It’s easy to imagine the piece as a treasure trove for performers, with four evenly exposed, meaty characters who demand attention.

Finding friendship in the big city are sensitive artist Warren and grad student Deb. Neil Cameron makes his role an appealing figure while Nora Perone does well with her character’s easily recognisable anger management issues.Warren might be played more bohemian and Deb a little sassier, but these are questions of interpretation rather than presentation – top marks to both performers. Meanwhile, struggling to love her new boyfriend, Kirby Hughes makes a convincing Claire, and her voice is a real pleasure. While the chemistry between Claire and her just-moved-in partner is necessarily reserved – much of the plot is her journey to accepting love – Alistair Frederick’s Jason was the highlight for me. Frederick makes a slightly soppy character shine and reveals solo numbers stronger than I’d previously recognised. I’ll stop skipping those tracks on my Ordinary Days CD from now on.

The production is admirably directed by Jen Coles, who keeps up momentum and adds nice touches that bring a sense of movement, specifically circularity, which suits the piece. It hardly matters that the staging here is so basic – it simply adds to the charm. As a final treat, there’s the special thrill of hearing performers without amplification – a rare event that always wins admiration for a cast and is perfect for this wonderfully intimate piece.