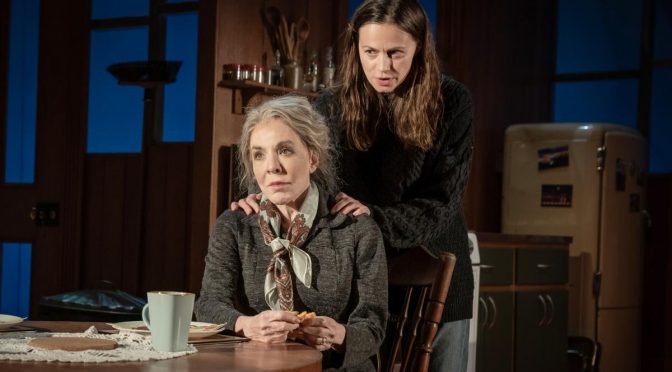 This revival of Marsha Norman’s Pulitzer Prize winning play offers the chance to see brilliant performances from Stockard Channing and Rebecca Night. But be warned – the play deals with the subject of suicide in a provocative and strange fashion.

Night takes the role of Jessie who decides to tell her mother, played by Stockard, that the evening the play recounts will be her last: she calmly reveals that she is going to kill herself. She’s planned it all, including telling her Mama all about it.

Questions arise quickly. Does Jessie have the right to take her own life as she argues? Do her reasons make sense? And what of this sharing. Can that be rational or even, in some way, kind?

It is the powerfully calm tone of the play that proves striking. Credit to Channing and Night for their consistency. With touches of dark humour, the frank discussions, flipping from mundane domestic details to family secrets, avoid histrionics.

‘night Mother gains much of its power from a cool look at life in a small community. But does Jessie have too many troubles? Epileptic, divorced with a troubled child and agoraphobic – her problems cloud the play’s cerebral intentions. Jessie’s anhedonia is heartbreaking but make her arguments unreliable.

You may have sympathy for Jessie and her desperate wish for control. But the pain she inflicts on her mother is unquestionable. Channing excels in showing her character is far from the “plain country girl” she claims, revealing a repressed intelligence and wit. Trying all manner of persuasion, cajoling then cruel, Channing is awesome to watch.

There is a bravery to Norman’s writing and Roxanna Silbert’s impeccable direction that is commendable. And an originality that impresses – trying to be objective about such an emotive topic is beyond me. Far from easy viewing, ‘night Mother is hard to recommend but is an evening sure to live in the memory.