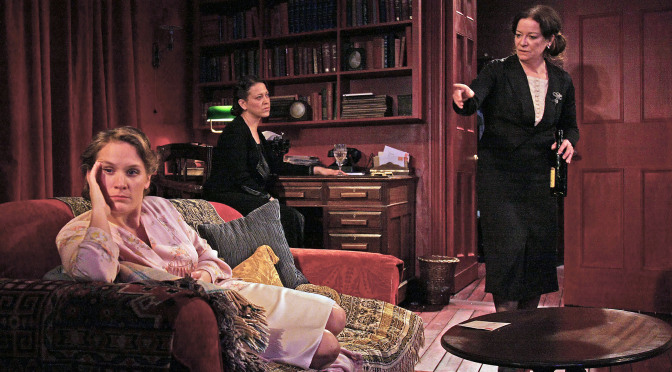 Nicholas Wright’s play deals knowledgeably with the life of formidable psychoanalyst Melanie Klein and her prestigious contribution to her science.

The period atmosphere of 1930s intellectual émigrés is carefully evoked with touches of tender irony, alongside a playful knowledge of the layman’s prejudices used to great comic effect. There are many moments of laughter in a work that is often disturbingly dark – Klein’s personal tragedy is a heart-rending one.

The story opens with the death of her son, following which Klein presents herself as a capable woman still in control. Through the course of the play, through interaction with the only two other characters we meet, we see this denial deepen and have to encounter the horrid possibility that her son’s death was actually suicide.

These two other players are Klein’s daughter Melitta and impoverished emigrée Paula, both also psychoanalysts. They have a frank and yet fraught relationship with one another but that seems simple in contrast to their relations with Klein.

Zoe Waites plays Melitta. Having been psychoanalysed by her mother (a shocking practice common in the early days of the discipline) a superficial competence only briefly hides her damaged self. Waites shows the character’s frustration with a mother she simply cannot compete against. The cruelty she plots fails to satisfy her, her attempts at sophistication seem pathetic, and she often gesticulates like a child.

Nicola Walker’s Paula is a more complex character whose story unfolds as the play progresses.  Initially a diffident presence, we discover her ambition is to become a patient of the great Mrs Klein. As intimacy deepens, it seems the plan is to take the place of daughter. The final scene shows their first consultation – planned to prevent reconciliation between mother and birth daughter. Keen to show her academic credentials, Paula has some of the clunkiest lines but delivers them with great expression.

Both actresses are shadowed by a wonderful performance from Claire Higgins as Mrs Klein. Her presence on stage is truly commanding, as she moves us from laughter to deep sympathy – an achievement all the greater since her character itself is portrayed as being far from endearing. At turns brittle and domineering, she can also be vulnerable and fragile. Her one violent outburst is electrifying, and her final breakdown likely to bring you to tears.

Higgins should surely be nominated for her fourth Olivier award for making a truly wonderful night at the theatre.

Written 3 November 2009 for The London Magazine