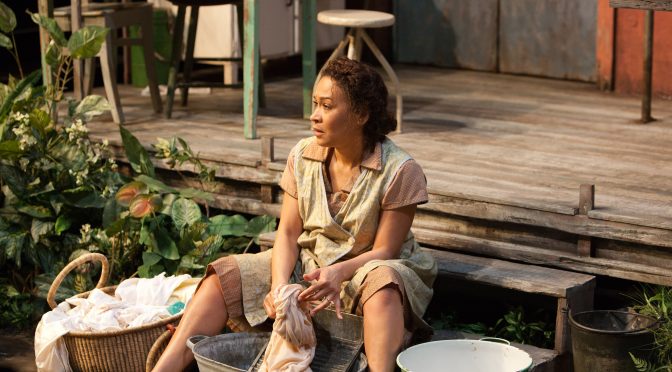 The National Theatre’s revival of Errol John’s 1957 play, Moon on a Rainbow Shawl, is only the fourth time the work has been seen in London. Michael Buffong’s production is, therefore, an opportunity not to be missed: this is a good old-fashioned play with a cracking plot and an authentic voice that ensures it still sounds fresh.

A group of Trinidadian neighbours, each with their own dreams and dramas, struggle to make the most of their lives. Their humble stories have a universal resonance and the characters are wonderfully drawn. Moon on a Rainbow Shawl has its brutal moments, but is always deeply humane, and finds the humour in its protagonists’ harsh conditions.

None of the characters is a saint but each has some heroic spark. Ephraim, a trolley bus driver desperate to better himself, and Sophia, a struggling matriarch devoted to her bright young daughter, are remarkable roles and Danny Sapani and Martina Laird give fantastic performances. Ephraim’s rage when confronted is magnificent as is Sophia’s collapse when events escalate and she succumbs to exhausted despair.

It’s impossible not to note the magnificent Jenny Jules who plays Sophia’s arch-foe Mavis – their battles are legendary, their squabbling, as Ephraim points out, comes from living like “hogs”. Beneath its exotic location, this is a kitchen sink drama but the politics never detract from the emotions on stage.

The action is plentiful and Buffong’s production admirably physical. Unfortunately, Soutra Gilmour’s set feels restrictive, wasting rather than exploiting The Cottesloe auditorium’s wonderful intimacy. And the set causes problems with sight lines too – don’t try to scrimp on restricted view tickets for this one. Initially impressive, the production would have worked better in a larger space. Staging Moon on a Rainbow Shawl elsewhere would have given more people the chance to see the work – make sure you don’t miss out.

Written 19 March 2012 for The London Magazine