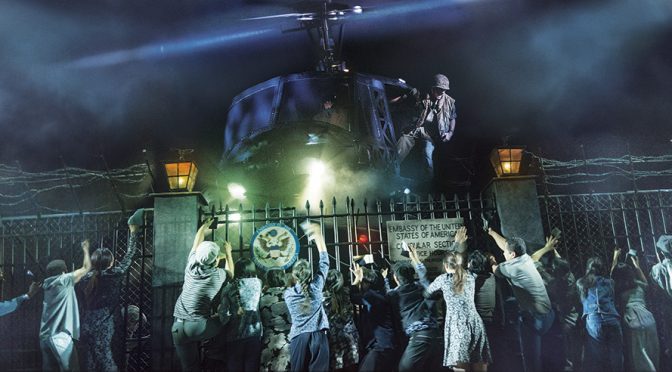 Miss Saigon is the biggest news in theatre this year. A massive success when it was first staged in 1989, running for a decade, the show’s arrival at the Prince Edward Theatre was keenly anticipated and has been widely applauded. The pre-publicity was big, the reviews had plenty of stars and the production itself feels gargantuan. It’s not just the story of an Asian woman and her relationship with an American that Claude-Michel Schönberg and Alain Boublil cribbed from Madam Butterfly and updated to Vietnam – the whole show has an operatic feel, with every emotion highly pitched.

This is a new production, directed with a fresh eye and fast pace by Laurence Connor. Those with good memories will enjoy an exercise in compare and contrast. The staging seems simpler, strongly relying on the lighting design – Bruno Poet’s work is stunning and a shoe-in for awards season. There’s also a new song for the American GI Chris’ wife, Ellen. And some of the lyrics have been modernised, with Michael Mahler joining Richard Maltby Jr on the credits list.

Producer Cameron Mackintosh’s timing seems regrettably impeccable – foreign wars and refugees give Miss Saigon a real edge. The show feels dark in our troubled times. Although the local pimp, who goes by the moniker of The Engineer, gets some laughs, the sex trade is depicted as truly seedy and the show’s raunchiness is suitably discomforting. While the famous helicopter still wows, it doesn’t detract from the terror of the scene where the Vietnamese who have helped the Americans are left behind to face their fate. It’s all suitably serious.

A deal of effort has obviously gone into the casting – a move that has paid off. The ensemble is fantastic and the leads more than fantastic. There’s very little dialogue in Miss Saigon, so the show is a real test of a musical theatre actor’s ability. All the more credit then, to Alistair Brammer for establishing our ‘hero’ Chris as a sympathetic character traumatised by the war. The Engineer, like many a devil, has all the best songs but Jon Jon Briones adds an energy to the role that is dynamite. As for Miss Saigon herself, Eva Noblezada makes both her vulnerability and determination believable, with a terrific voice. It’s hard to believe Noblezada hasn’t held the role for years. With a performance this strong, in a show this good, let’s hope that’s just what she will be doing.