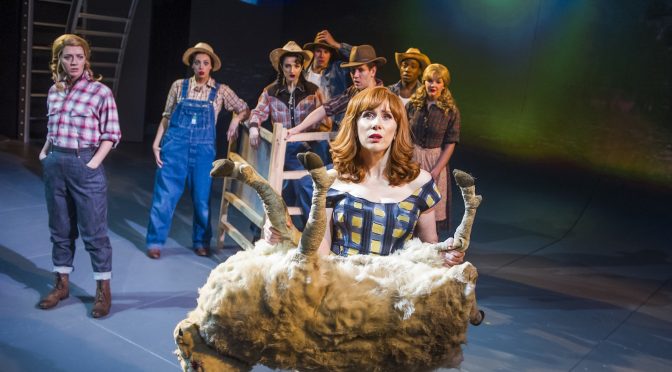 The critics have not been kind to this new musical from Adam Long, Alex Jackson-Long and Gabriel Vick. With the action framed by the 50s enthusiasm for nuclear testing in the Nevada desert, including beauty pageants to entertain tourists coming to see the mushroom clouds, this show feels like an unfinished canvas. Not sharp enough to be a satire, nor energetic enough to be an extravaganza, the romance is too funny and the comedy too lame.

The shame is that the talent on stage is fantastic, with some of my favourite performers. Dean John Wilson and Florence Andrews are the young leads, playing an army deserter and a sheep farmer who fall in love – and they both sound great. The same can’t be said about the songs. Too generic and forgettable, there are maybe three fun tunes. Furthermore, poor pacing stubbornly deflates the show’s momentum.

Then there’s Simon Lipkin and Catherine Tate, playing a hotel manager threatened by the mob and a wannabe fashion designer. What these talented comedians manage to salvage out of so little is astonishing. Lipkin can command a stage and Tate have them rolling in the aisles by sheer force of personality. Which is what they have to rely on here. The laughs they generate come mostly from adlibbing.

There’s an excellent performance from Daniel Boys as well, as a banking villain, but why some of the incidental numbers weren’t sacrificed to give him another song is a mystery. The ensemble are committed (if thin on the ground) but over amplified, making listening hard work. The convoluted lyrics are sometimes clever but mostly not worth the effort.

Nearly every line, let alone most of the numbers here, is just that little bit too long. There’s a plot about a Soviet spy and a character or two that could be cut. A harsher hand is needed from co-directors Long and Bill Deamer. But the bigger problem remains the question of what Miss Atomic Bomb really wants to say. There’s an anarchic streak – a song crazily connecting sheep and hope and a good second act opener about the Cold War – that point out potential. Unfortunately there isn’t enough oddity. Inspired moments fail to detonate anything big.