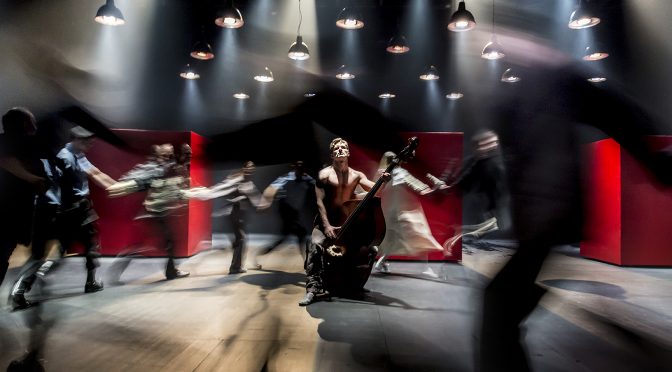 Such is Cheek by Jowl’s international reputation that tickets for its infrequent London appearances can be tricky to obtain. I remember trying and failing to see this show back in 1994, so generously offering it online during lockdown is especially welcome. Even better, the production lives up to expectations – this is the best Measure for Measure I’ve seen.

There are no gauche touches to make the piece contemporary. Any claims for the universality of Shakespeare benefit as a result. Director Declan Donnellan sets the story of Duke Vincentio, who dons a disguise to observe the goings on in Vienna, in a setting full of police and prisoners making the most of the play’s debates over justice, law, states and rulers.

This violent, often frightening, city can be recognised as now but could be anytime and anywhere. A sense of surveillance (without the trace of a CCTV camera) is ingrained in every curious or scared look. Obeying and resisting power struggles in each scene. Donnellan even manages the play’s considerable religious content expertly – moments of prayer become potent.

Performed in Russian, it has to be said that some of the surtitles come across as a little odd. And the recording isn’t of the highest standard. While Nick Ormerod’s design of red cubes on a bare stage still looks great, the way the cast moves around as a group – ushering in scenes, creating the sense of both chorus and mob – is clearly lost. It does makes you want to see the real thing even more.

The acting is magnificent. Donnellan utilises his ensemble to such perfection that every performance is of consequence. Without disrespect to other productions, I can’t remember being struck by the character of Barnardine before – here, Igor Teplov’s performance makes it a memorable role. The seedy side of city life is conveyed with Alexander Feklistov’s grubby Lucio and Alexey Rakhmanov’s menacing Pompey.

The siblings faced with the play’s famous dilemma are made compelling and very human heroes. As Claudio, Petr Rykov brings a passion to the affair that has landed him in jail (aided by excellent work from Anastasia Lebedeva) along with an animality that invigorates the stage. As for Anna Vardevanian’s Isabella, trying to free her brother – her performance is stupendous: full of defiance, intelligence and also horror, she makes the role intensely moving. Andrei Kuzichev plays their adversary Angelo, the merciless hypocrite left in charge, with a creepy edge – he sniffs Isabella’s chair when she leaves – that becomes all the more frightening for the character’s intelligence.

All this is great, but Donnellan’s masterstroke is to bring to the fore a role often seen as only a catalyst: this is the Duke’s Measure for Measure. Taking the role, Alexander Arsentyev’s Vincentio is nervous at first – could his problem really be life in the public eye? The Duke makes for a pretty useless disguised Friar and the show gets some humour out of this. Arsentyev seems barely off stage. The focus is his journey as a politician, and the production’s emphasis on the public during the final scene proves electric. The conclusion has a transformative power that transcends the resolution of plot. That other characters become something like pawns in a sick game, how they will recover from Vincenzio’s experiment rendered an open question that adds a troubling edge to what we’re been watching. Conversations with Shakespeare that are this confrontational, let alone performed with such excellence, are seldom seen – check this one out while you can.