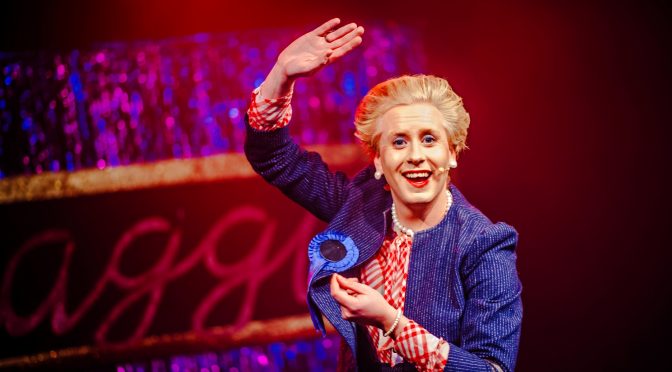 Starring in this critically acclaimed show, previously a sell-out at the Soho Theatre and on the Edinburgh Fringe, former Prime Minister Margaret Thatcher is an unlikely cabaret diva. You surely remember how she resigned in favour of Neil Kinnock and repealed the homophobic section 28 after a night out when she became ‘the Queen of Soho’. Maybe not.

Now the lesser-known story of how the lady turned is told with the help of Jon Brittain and Matt Tedford, who bears a passing resemblance to the Iron Lady. It seems that Maggie’s views on the gay community changed after she was mistaken for a drag queen. The show has some of the finest satire you’ll see, using hindsight for all its worth, getting laugh after laugh. There are smutty jokes too, but Mrs Thatcher is firmly in charge, handbagging hecklers and showing suitable outrage at the true blue gags.

Joined by Nico Lennon and Ed Yelland, as Hesel and Tine (geddit?), taking on all the other roles, including the villainous Jill Knight (feel free to boo) and our hero Peter Tatchell, attempts to upstage Mrs T with cut-off denim shorts and handlebar moustaches are fruity but futile. The joy of having 80s pop songs performed by the ex-Prime Minister is irresistible. I never thought I’d say it, and, of course, it’s the delicious irony that the whole show revolves around, but Mrs Thatcher gets my vote.