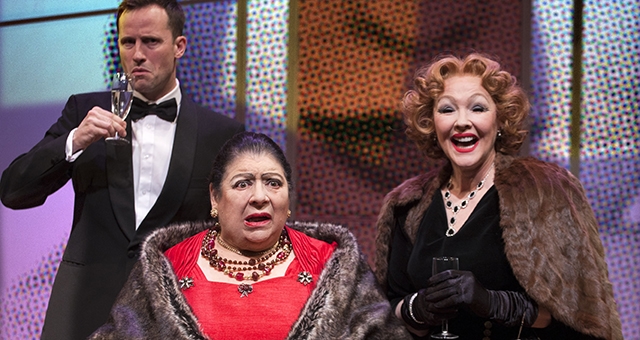 Everybody loves Miriam Margolyes. This story of a monstrous cosmetics tycoon, once one of the richest self-made women in the world, provides a larger-than-life role that brings her centre stage. One of our finest comic actresses, it’s a thrill to see Margolyes expertly handle some great jokes.

The briefest research about Helena Rubinstein shows that playwright John Misto’s depiction is motivated by the potential of caricature. So be it, making the character ruthless and miserly gives the perfect palate for Margolyes to work with. She shouts Yiddish insults from her skyscraper to rival Revlon’s, while keeping chicken drumsticks in the office safe. At least she’s kind enough to provide free electricity for those slaving away in her office. A collection of clichés yes, with malapropisms via Poland, but it’s all very funny.

While the comedy foundation is good the rest of the play’s makeup is hastily applied. Attempts at suspense surrounding espionage in the cosmetics business fail to add tension. Helena’s traumatic lifestory and emotional frigidity feel tacked on. A substitute son, in the figure of her gay bodyguard, capably performed by Patrick O’Higgins, gives rise to more good gags before becoming a dead end. Intense rivalry leads to some great scenes with the excellent Francis Barber as Elizabeth Arden (this relationship already the subject of a documentary and a musical) but the two makeup maestros’ could have more time together. Barber seems criminally wasted.

Jez Bond directs efficiently but like the no frills set from Al Turner there’s a lack of imagination that the show really needs an injection of. Listed like this, it all sounds negative. But you’ll be laughing enough to forgive. Nearly all of Turner’s jokes – and there are a lot of them – land. If the play gets as many star ratings as it has laughs its sell out run at the Park will only be the start of things.