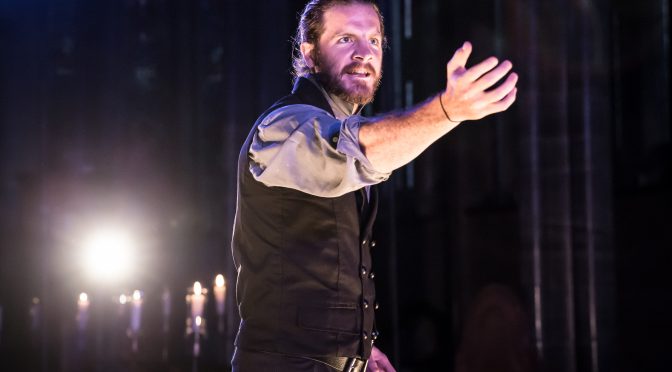 Touring Company Antic Disposition’s visits to London are a summer highlight and this new production of Shakespeare’s tragedy shows their characteristic skill and careful intelligence. Without fuss, directors Ben Horslen and John Risebero present a quality show with classy delivery and smart touches to make you consider the text anew. Risebero’s design provides a Victorian vibe that fits with the play’s supernatural content and adds a stylish, surprisingly reserved edge to all the torment in the story.

Taking the lead is Harry Anton, whose Macbeth is as malicious as he is murderously ambitious. He’s also surprisingly nervous, wringing his hands even more than his wife does. It’s a sensitive portrayal that, along with a dashing stage presence, creates a challenging amount of sympathy for the tyrant and works very well for those famous soliloquies. His Lady is good too; Helen Millar gives a detailed performance that shows an understanding of her character’s development and aids the tension in the play. The couple’s all-important chemistry is spot on: their sexual attraction established so well that it becomes poignant when Lady Macbeth sees her husband’s passion alter.

The witches are centre stage in this production, with Bryony Tebbutt and Robyn Holdaway (who also do well doubling up parts) led by Louise Templeton. All three are damn creepy – Holdaway gives a smile to send a shiver down the spine – but cleverly so. The brilliant idea here is to cast the witches as servants. They become onlookers to events and have more lines than usual, handing out drinks or standing with Macbeth on the battlements. Their cauldron is a tin tub for cleaning bloody sheets and they hold a séance complete with a flying table. Meek maids one moment, scary the next, they make this Macbeth gripping. An understated trio, as witches go, their quiet control actually makes them more frightening.

Horslen and Risebero aren’t afraid to throw in a few bumps in the night and piercing screams to make you jump (I did, twice), all aided by the venue’s atmosphere and excellent acoustics. And the fight direction from Bethan Clark is also strong – it’s clearly a strength for Anton, and his final scene with Andrew Hislop’s commanding Macduff adds to the excitement. There isn’t a scene wasted: Nathan Hamilton makes more out of Malcolm than is usual and there are even interesting ideas for the Porter’s scene that Chris Courtenay gives his all in. But it’s those witches that make the production memorable – playing so expertly on Macbeth’s vanity and superstition… and ensuring that he won’t be the only one to have sleepless nights.