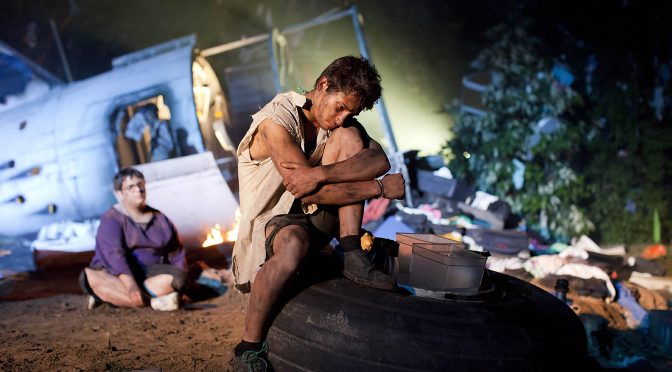 An airplane has crash-landed in Regent’s Park Open Air Theatre. With an engine planted amongst the audience and luggage hanging from the trees, designer Jon Bausor’s Lost-inspired set immediately establishes the extremity of the situation. The dismantling of the British flag of the tailfin – to make a temporary shelter for the schoolboys who have survived the crash – succinctly reflects the theme of the decline of civilisation that courses though Golding’s original narrative.

Everybody’s favourite text from school days, the 1954 book, is expertly brought to the stage by Nigel Williams. Adapting it [for the RSC in 1995] must have been a daunting task – not simply because of its fame, but because Golding’s authorial voice is so strong, his work so filled with symbolism and so marked by a scarcity of dialogue. Williams neutralises the 1950s schoolboy chat that could cause laughter: the whole production is vague about period, a move that avoids distraction in these ephebiphobic times. Better still, the script makes many of Golding’s concerns, such as the dynamics of society and the struggle between good and evil, only too clear.

Timothy Sheader’s direction is remarkable. Working with a young cast, he has fostered a collection of impressive professional debuts – London hasn’t seen the like since The History Boys. Treating the stage as a playground, then a hunting ground, the boys move with frightening agility, undertake extended fight scenes convincingly and viscerally embody the savagery they descend into.

Alistair Toovey is wonderful as Ralph, the group’s first chief, engaged in a power struggle with Jack (James Clay), a choirboy-turned-hunter who leads the boys in a very different kind of song and dance. Clay bristles with adolescent awakening. There are also stand-out performances from George Bukhari as Piggy, a moving voice of reason in the wilderness, and Joshua Williams as Simon, whose discovery of the truth about the ‘Beastie’ scaring the children has brutal consequences.

Clay does especially well in playing out Jack’s manipulation of the weaker boys through fear. As night descends on Regent’s Park, and the hunt to kill Ralph begins, the boys become the “solid mass of menace” Golding describes. Sheader makes the escalation of violence theatrically plausible but, more remarkably, his pacing and use of slow motion give the audience time to think through what is going on. This is the same privileged position Golding gives his readers, making the production a true compliment to a terrifying modern classic.