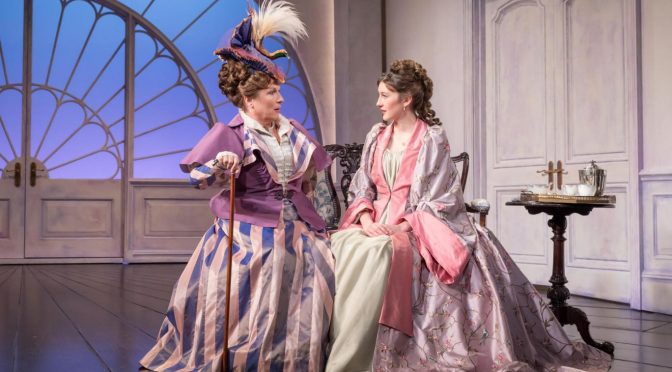 The estimable Kathy Burke is an expert in comedy. Wearing her director’s hat for Oscar Wilde’s 1892 play, her feel for laughs is instinctual: she makes the most heavily quoted of aphorisms light and the whole evening fun. In a cast of big guns, national treasure Jennifer Saunders is the star and has the audience laughing at every turn. Despite a small role, Saunders fans won’t be disappointed. A front of cloth song, written for her by Burke, is the funniest three minutes in a theatre that you can imagine.

Saunders is a good enough actress to know she’s not the lead; her role as the Duchess of Berwick is to show the follies of society and, channelling a previous performance in the much underrated Let Them Eat Cake, she is brilliant at this. The leads are Grace Molony as the moral Lady Windermere and the always excellent Samantha Spiro as the mannered Mrs Erlynne – a woman “with a past before her” –  captivating society despite scandal, and adding drama to attempts at reclaiming respectability.

This trio of performers alone makes this a show that celebrates women. And there are some strong performances from the men in the play, too: Kevin Bishop plays the rakish Lord Darlington with passion, and Joseph Marcell gives a first-rate comic turn. But Burke reminds us how strong Wilde’s writing for female roles is – how he treated them with a fairness, if not an equality, far beyond his time. The respect extends to smaller roles for women: Natasha Magigi has a lovely cameo. And Burke makes sure even a maid gets a personality here. There’s a struggle with our titular character, the lesson she has to learn – and the protection those close to her insist on ­– are so dated that she is hard to connect to. But, as Lady Windermere herself says, she is “behind the age” – we are supposed to feel unsatisfied with her, and her development is captured adroitly by Molony.

Most impressive is the production’s treatment of the play’s histrionic moments. We cannot be shocked in the way Wilde expected, although it’s easy to see that the drama and comedy would have been more violently contrasted in his day. But, in keeping with this season of his plays, masterminded by Dominic Dromgoole, we can still see Wilde as a radical. Burke has a clear appreciation of how he played with the theatrical melodramas of his age. There’s a brilliant scene with the burning of a plot-turning letter, and the ironies of family history don’t deserve a spoiler. Wilde was having fun with conventions – Burke follows his lead, and fun is what you’ll have too with this clever revival.