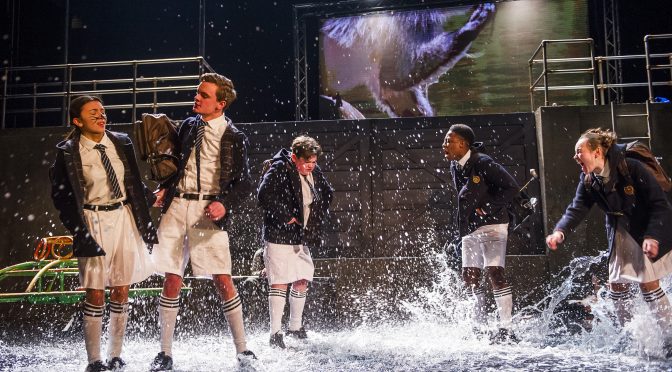 Featuring yet more troubled youths, playwright Simon Stephens’ 2001 play has been revised under the direction of Sean Holmes. Set one year on from a murder (details are deliberately vague) – there are bullies, broken homes and lots of lies. This is a frustratingly slippery, provocatively outrageous play. But by carefully playing with naturalism, Stephens’ unsettling world of disturbing imagery and ambiguity is brought to life.

The direction emphasises Stephens’ oddities too emphatically: think gnomic pauses and sudden shouting. But Holmes has a crisp hold on the play’s tension and it’s exciting even while you scratch your head. Hyemi Shin’s ambitious design, with its flooded stage looking great during fight scenes, is fussy, if impressive. But with the heavyhanded symbolism of a dam wall threatening to burst at a pivotal moment, the set assaults us with metaphor. 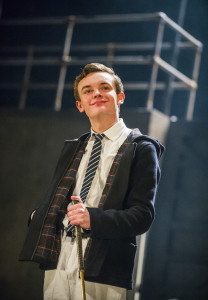 Moses Adejimi, Ella McLoughlin and Billy Matthews (above) make a tight trio of bully boys, creating a choral round out of Stephens’ expletive-obsessed script. It’s a shame more wasn’t made of the writer’s lyricism. Matthews takes the lead, reminiscent of Pinkie in Brighton Rock. But, like his nature-loving victim, performed valiantly by Max Gill, extreme reactions place a barrier between characters and the audience; maybe it’s best to think of this as a fence through which we watch a human zoo?

Another bludgeoning simile – films of primates distractingly projected throughout the play – confirms the production as a nature study rather than anthropology. There’s the observation (twice) that the youngsters aren’t allowed to be children anymore but Holmes moves us a long way from social comment: the focus is that “in nature terrible things happen all the time”. It’s a questionable exercise of dubious appeal.