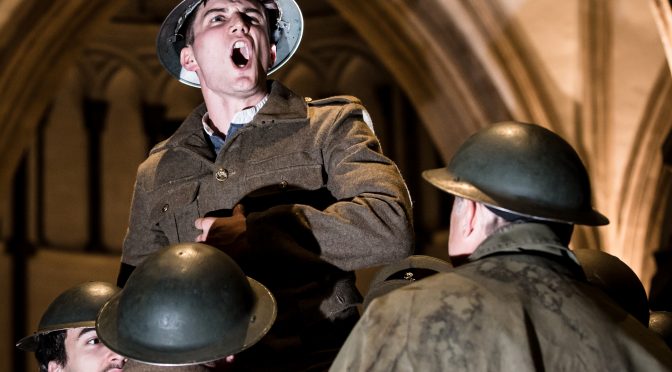 Benefitting from a fantastic location, the show that marks theatre company Antic Disposition’s tenth birthday serves to commemorate World War I as well as the 600th anniversary of the battle of Agincourt. If that sounds like a lot for even Henry V to take on, rest assured that the play is neatly manipulated and finely produced.

Joint directors Ben Horslen and Jon Risebero have a group of convalescing British and French soldiers putting on the play during a break from the trenches. You might question the efficacy of this as a therapy – it’s hardly It Ain’t Half Hot Mum material – but impressive gains result. Poignancy comes from the prologue’s excuse for a “crooked figure” performing – these men are injured. And there’s a lovely sense of complicity, with pretend fumbling at the start and lots of addresses to the audience. The play’s female roles benefit from the backdrop, especially the courtship scene with Floriane Andersen, whose character we also see as a nurse.

Another particularly strong moment (pictured above) has the soldier playing the role of Bardolph breaking down as he faces his execution, performed painfully well by James Murfitt.

Freddie Stewart shows exciting promise in the title role. His youth is a slight barrier when it comes to Prince Hal’s transformation into a responsible royal; it’s difficult to imagine him having time for “greener days”. But this plotline is downplayed and we enjoy a virile and appealing King under pressure, juggling bluster and humanity, while examining his duties.

The play is presented in traverse, with an accomplished mobility that shows this is a team used to touring. With the church’s acoustics, the whole production sounds sublime – it’s a genuine aural treat. And it’s easy to understand the addition of well-performed songs by George Butterworth to poems by A E Housman, although this extra layer to the show brings it close to overload. There’s a surfeit of ideas here – and all credit to the ambition of Horslen and Risebero. But the show – well worth seeing – aims for more bite and emotional impact than it has time to deliver.