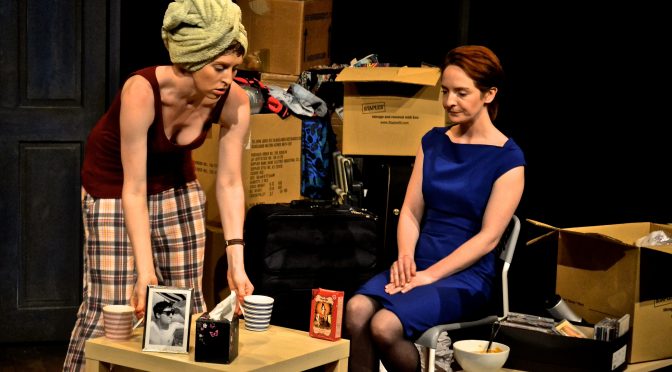 A strong revival of Amy Rosenthal’s Henna Night has just opened at the New Diorama Theatre. The scenario is a meeting between the jilted Judith and her ex-boyfriend’s new partner Ros, who responds to a desperate drunken phone call. The play focuses on women in love and packs plenty of observations into its less than an hour duration.

From a comically frosty reception, the women bond over hair tips and henna. It’s hardly a subtle conceit but it’s effective. This is an early work by Rosenthal and is perhaps too angsty and lacking in real drama: Judith’s heartache seems a touch juvenile and you never really doubt she’ll get over it soon. But, admirably, the play isn’t sentimental and rings endearingly true.

Henna Night benefits from the experienced direction of Peter James. The characterisation is fine and, working with two talented young actors, James does justice to this tight two-hander. Hatty Preston plays the “adorably flawed” Judith with sympathetic realism, and Nicola Daley accompanies her as the “dull, dependable” Ros, winning us over with her determined common sense. Both women have fine comic skills and hold the stage with ease.

Rosenthal is sensibly even handed, showing the love affair from both women’s perspectives and dissecting their relationship with the offstage Jack in a way we can connect with. We’ve all done the first love thing, so it’s interesting…if light. It’s a bit like that moment at the end of having a trim when the hairdresser holds up a mirror to show their work and everyone nods and smiles – in short, a stylish job that you should book in for.

Written 13 June 2014 for The London Magazine