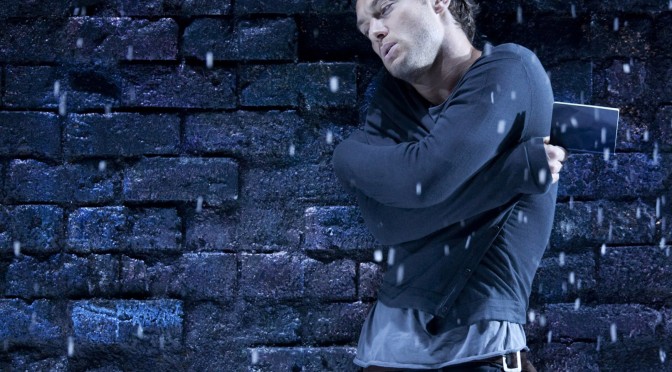 A key ingredient to the year long, highly ambitious Donmar in the West End project has been its ‘celebrity’ casting. Younger members of the audience at Jude Law’s Hamlet would certainly feel that the venture has saved the best until last.

It is always great to feel the excitement a star creates in a theatre and heart warming to see the different crowd of people that they attract. But while devoted fans are sure to have a thrilling evening, the rest of us are bound to ask if Law justifies such a charged atmosphere? It is good to report that he does.

Jude Law’s delivery of Shakespearean verse is clear and confident. His stage presence, if not commanding, is conscientious and a real effort is made to engage the whole auditorium. He seems fully aware of the space surrounding him, in a manner many actors working mostly in film frequently forget.

And Law’s engagement with the text genuinely adds something to our understanding of the play. His approach is to show us an angry Hamlet – one of the loudest we might have seen and certainly the most potentially violent. His is not just a brooding and tortured presence but also one who really does seem capable of the play’s bloody ending. Any melancholia has a dangerous edge, which adds drama. Viewers may find this bombast unconvincing, even humourless, but it is a refreshing take on the role.

Unfortunately, Michael Grandage’s production neglects the rest of the cast. So much attention has been focused on Law that other performances appear weak. Kevin R. McNally’s unfrightening Claudius seems to have stumbled on to the throne rather than plotted his way there – we get the impression that the murder of his brother was something that happened by chance. A fine actress, Penelope Wilton sadly makes little of Gertrude. While we can see that she comes to repent her marriage, we cannot fathom her motive for it. In avoiding a Freudian interpretation of the play we are left with a sexless Queen who wears comfy looking trousers. It is difficult to feel anything for her.

One problem might be the speed of this production – commendably, it is just as fast as a thriller and often as gripping. Yet while Hamlet’s soliloquies allow him to take time, the other characters seem rushed. Nobody else in the cast really gets the chance to stand up to Law – it they did then this might have been a great production. As things stand, we simply have a great Hamlet.

Written 7 June 2009 for The London Magazine