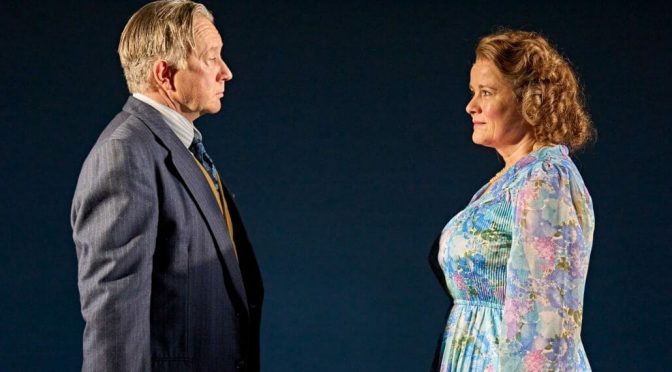 This early Alan Bennett play, revived by Patrick Marber, is an odd one. It’s a farce about sexual frustration among the middle classes. But with meta-theatrical touches that play with the genre, it’s an attempt to write this kind of comedy in a different way (the lack of a set tells you that much). Along with crudity, poetic moments focus on mortality. And there are touches of a revue, too, complete with songs. It’s novel, experimental even. But Habeas Corpus is more interesting than it is funny.

There are laughs. The sillier jokes are good and have aged best. Darker moments, leading to the cautious billing of the show as “from a less enlightened age” have immoral doctors and queasy Ortonesque moments. But Bennett is appropriately harsh about bad conduct. And, impressively, the women in the show are as sexual as the men. Yet those laugh-out-loud moments come from the cast performances rather than the script.

Our guide to proceedings, the cleaning lady Mrs Swabb, is great fun (and Ria Jones excellent in the part). Dr and Mrs Wicksteed, and son Dennis, are all looking for love and easy enough to laugh at… initially. But their desperation is double-edged, and strong performances from Jasper Britton, Catherine Russell and Dan Wolff (standing in for Thomas Josling) mean we come to care for them. Does feeling empathy make us laugh less?

It isn’t unreasonable to expect a comedy to be fun. But if that’s all you require, Habeas Corpus might leave you disappointed. Lust here is for life as much as sex, and there’s a weighty, existential, edge. There’s also an awful lot of loneliness in the play. Bennett’s mix of comedy and melancholy may keep an audience on its toes, but Habeas Corpus doesn’t allow relaxation into a really good time.