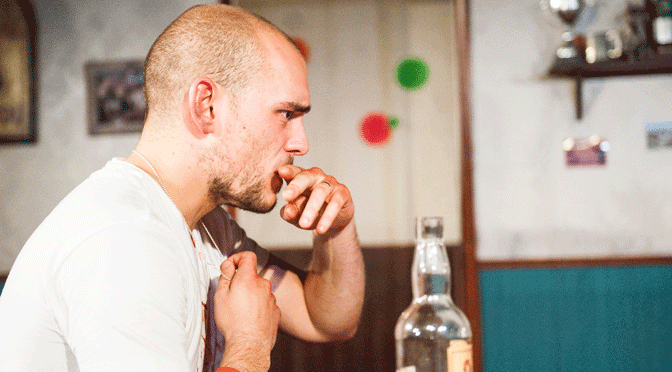 A hit at the Edinburgh Festival Fringe last year, Cat Jones’ new play, Glory Dazed, opened last night at the Soho Theatre. Based on the author’s work with ex-serviceman prisoners in Doncaster, it tells the story of Ray, who returns from Afghanistan in plenty of trouble and finds that his ex-wife and best friend are now a couple. Drama ensues, the scene for which is a turbulent night at a pub lock-in.

The politics is light. Jones’ focus is the human cost of conflict – on the sufferer and his loved ones – rather than the war itself. The result is an intense, intimate, hour-long drama that works well. There are flaws: a young bar maid drawn into events and instantly attracted to the bloodstained, alcoholic Ray is unconvincing, despite being ably performed by Kristin Atherton. And the humour in the piece is problematic, with the drunken vitriol passing for wit, doing nothing to endear Ray to us.

But the dialogue in Glory Dazed really rings true and the actors do well to make the most of it. Both Adam Foster and Chloe Massey, the ex whom Ray used to beat and the friend he intimidates, reveal the depths of their complex, believable characters. Massey is especially bold in dealing with her character’s no-nonsense approach, never shying away from her character’s pain and anger.

Inevitably, Samuel Edward-Cook steals the show as Ray. This is a tremendous performance from a young actor we’re sure to hear more from. Edward-Cook doesn’t just manage to bristle with violence but also conveys the emotional turmoil of his character. His performance, combined with the well-crafted script, makes this an easy one to recommend.

Written 25 April 2013 for The London Magazine