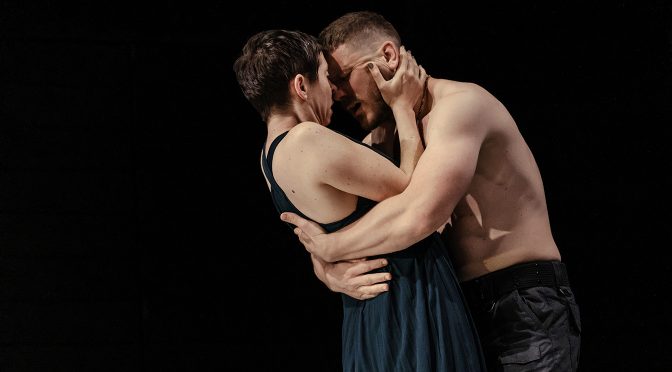 For all its emotional power and intellectual sophistication, the triumph of this retelling of Clytemnestra’s story from Marina Carr is its directness. The play is moving and stimulating but, above all, it is marvellously, beautifully, clear. Writing this skilled should not be missed.

In this story of Clytemnestra’s revenge after her husband Agamemnon sacrifices their daughter Iphigenia, every character is incredibly detailed. Each role narrates the action (like a Greek chorus) as well as soliloquising, addressing the audience, and engaging in blistering argument. Flipping effortlessly between approaches is a credit to every performer and Annabelle Comyn’s flawless direction. And the mix, applied with impeccable naturalism, lulls us towards a breathtaking finale.

It is easy to see Carr’s efforts as a welcome feminist take on the story that brings women to the fore. Eileen Walsh is stunning in the lead role, with a performance that is raw but also calculating. Walsh cannot be praised enough. But there are also strong role for her servant, Cilissa, and Cassandra, played by Kate Stanley Brennan and Nina Bowers respectively, who have their own stories fully realised.

And let’s not underestimate Carr’s achievement, as the role of alpha-male Agamemnon, and the performance from David Walmsley, are just as strong. Can the daughter-killing-tyrant really have any defence? Believe it or not, Carr plays devil’s advocate and puts forward some strong sophistry. You can almost… possibly… feel a little sorry for the hero? In a play obsessed with war, and what war does to men, Agamemnon is trapped by politics, machismo and battle lust – the latter so vividly evoked by bloody and metallic imagery that you can practically taste this play.

Clytemnestra and Agamemnon still love each other – adding further impact to the tragedy. Carr shows how grief can transcend all as Agamemnon says his wife is “moving somewhere beyond men and women”. In a pivotal scene of seduction, Walsh seems to overpower Walmsley physically as much as emotionally. It must be seen to be believed and is a credit to both performers. This is a superb text – daring and original – executed expertly.