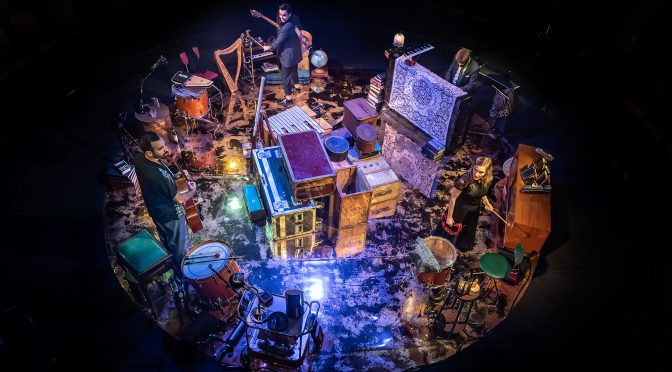 Here’s another new theatre for London, and a particularly stylish one – it’s clear that cash has been splashed on this refit of the Comic Strip’s one-time home in Walker’s Court, Soho. Still a little seedy outside, the theatre is one of the comfiest I’ve visited and the first year of programming from artistic director Rachel Edwards looks like a good mix. First up is a deceptively modest affair, a song cycle for four performers from Dave Malloy that’s a stylish American import aimed at a sophisticated clientele.

While there may be a Halloween connection, Edgar Allen Poe interests Malloy as much as ghosts. The piece takes in so many different kinds of relationships, around the themes of love and loss, with so many references, it ends up quite dizzying. Malloy cites the concept album as an inspiration, with track numbers announced to the audience, but any concept seems loose. There is a unifying story buried here, a love triangle with two sisters, but the focus isn’t clear. The story spans time and space and even seems to be connected to the Arabian Nights! It all becomes a little too confusing to actually enjoy. While fluid identities may be exciting to explore, they don’t aid any narrative here. And unrelated songs, while often musical highlights, don’t help either. As for the score, it’s eclectic to the point of bewildering. You expect a few scraped strings given the title but there are moments when Malloy gets carried away with the weird that aren’t so wonderful. And he isn’t scared of lyrics devoid of poetry, which is fine, but occasional imagery that could be described as baroque adds to an inconsistent feel.

If these are problems – and you could easily defend or revel in the compositions’ diversity – the cast take them in their stride. The Boulevard Theatre has recruited some serious talent that really delivers. Zubin Varla serves as a commanding presence and sounds fantastic, while ‘cellist Niccolò Curradi leads the music. Both Carly Bawden and Maimuna Memon play plenty of instruments and their voices are remarkable; Memon is especially good when it comes to creepy, Bawden a natural at puzzled innocence as past lives come into focus. The whole cast makes the more outlandish moments of the stories feel grounded and, when it comes to audience participation – of which there’s rather a lot – shows yet more expertise.

A lot of Ghost Quartet is wilfully quirky. It’s a quality that clearly appeals to director Bill Buckhurst. Again, that audience participation comes into play, with drinks and musical instruments handed out to the crowd prompting a chaotic feel. The benefits include keeping an audience engaged – it’s impossible to know what’s coming next, and it feels original and is often funny. But being so obviously ‘challenging’ can come across as contrived – to the point of being smug. Nonetheless, the show is undoubtedly an excellent choice for the venue; Buckhurst makes the most of its intimacy and clubby atmosphere, while Emma Chapman has fun with an impressive lighting rig. While I can’t imagine many falling in love with Ghost Quartet, it is a natural choice that makes a super start for the Boulevard Theatre.