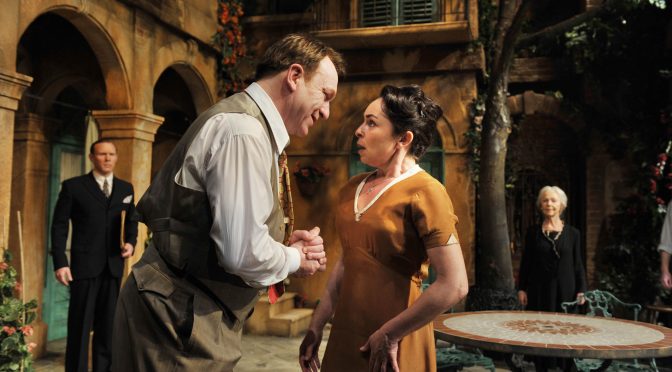 Both the Almeida and its artistic director Michael Attenborough have well-deserved reputations for European classics. Their latest offering, Filumena, is a quality affair that both entertains and highlights the voice of its author, Eduardo De Filippo. In a tight, sprightly new version by Tanya Ronder, the show sparkles with wit and preserves an unusual edge. Filumena, a retired prostitute and the ultimate tart with a heart, plots and plans marriage with her long time partner Domenico in order to secure a future for her illegitimate sons. And what could be a cliché is enriched by the text and the direction to contain thrilling elements of the will-they-won’t-they kind and a moral questioning that runs through to its satisfyingly sweet end.

Clive Wood plays Domenico, an ageing lothario with a touch of Tony Soprano and a patronym Filumena fancies for herself. We shouldn’t like him but we do. Part of the appeal is his relationship with Filumena. Wood does a fantastic show of both frustration and fidelity. Because of his bullying tactics, it’s great to see him taunted, yet the dilemmas Filumena forces upon him make him much more than just a stereotype. As Filumena chillingly invites him to “laugh while you still can, because soon you won’t remember how,” his machismo mask slips just long enough for us to see his complexity – treading this fine line is a marvellous achievement from Wood.

Wood has a worthy sparring partner. Samantha Spiro brings alive any production she stars in and in Filumena she excels yet again. Formidable and frightening, she’s a shrew who refuses to be tamed and yet conveys a sense of vulnerability, presenting her character’s tumultuous, potentially hackneyed journey in a way that feels real. It’s not just funny, it’s also engaging, as we band behind Filumena praying she gets her way. Attenborough’s pacing is essential here, giving us time to catch our breath and think. But never long enough to fall out of love with Filumena. Domenico knows he is with someone special but that he has to take care. “Anyone who has anything to do with you needs to be wide awake,” he says. Given Spiro’s magnificent performance, it’s true that you won’t want to take your eyes off the stage.

Written 24 March 2012 for The London Magazine